IT’S odd that for a company that has produced some of the finest affordable fast cars of the last three or four decades, it biggest selling model has had a distinctly patchy history of hot hatchery.

The old Focus, a wonderful handling car in even the most run-of-the-mill models, had the underwhelmingly horsepowered ST170, with which the firm misjudged the ‘power and more power!’ fashion, and the fidgety RS, which had enough power but all the predictability of Pete Doherty. The thing made the average country road seem like a special rally stage in Kielder forest.

So with the new generation Focus hot hatch, Ford is trying to be more middle of the road, combining its engineers’ abilities to produce high grip, great-handling cars while giving it enough power to keep drivers who care about big bhp numbers happy too.

The ST has been put together by the people at TeamRS who did such a superb job with the Fiesta ST. Their main priority is to produce sweet handling cars – not just bung in a large motor in the hope that ridiculous power will sell a torque-steering handful of a car.

But don’t imagine the ST is underpowered. With 223bhp produced from a Volvo-sourced five-cylinder 2.5-litre unit with a turbocharger it’s no slug, but gone is the edgy character of the old 212bhp Focus RS, where a racing differential was often blamed for its torque steer and tramlining tendencies.

The new Ford Focus, and even the ST incarnation, has essentially the same suspension as the old Focus but such was the impressiveness of its chassis that all the engineers have had to do is hone and tune it. Add in that the new car is stiffer, and you got a fine base on which to perfect hot hatch suspension.

Our test car came in a bright orange colour that was exactly the hue of B&Q, I noted, as the car disappeared, chameleon-like, alongside the cabs of one of the DIY firm’s lorries as I swept past.

But it certainly turns heads. Whether it was the in-your-face colour or aficionados spotting the deep front bumper, jagged 18-inch alloys or the aluminium detailing I’m not sure, but the effect is certainly striking – the ST looks special without teetering on the brink of being naff.

Ford has done a good job with the interior, too. Recaro seats, a chunky leather steering wheel, aluminium inserts on the handbrake and gearlever, metal pedals and extra instruments plonked on top of the dash for important performance things like how much turbo boost you’re using, give it enough of an edge over a standard Focus. So all the elements are in place, but does the Focus deliver on the road?

It certainly sounds the part with the combination of whining turbo and bellowing engine. And with direct steering, an accurate short-throw gearshift and plenty of grip despite 223bhp trying to escape from the front wheels, it is very quick through all its six gears.

The stiff suspension, large wheels and low profile tyres mean you know what is going on below you but the ride is not unduly crashy.

The ST is a solid, grown-up feeling car and has an air of class about it. It does not have a boy-racer ambience (even in orange), but instead is a very professionally, thoughtfully sorted vehicle. 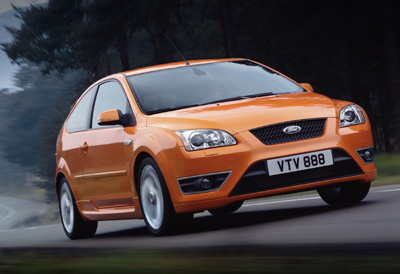