HOW exciting can it be to find yourself behind the wheel of a car as ubiquitous as the Ford Focus – and one that, in its latest incarnation, falls short of the striking looks of its predecessor?

Our Focus has been with us since last May and, at the risk of raining on the growing parade of these cars on our roads, I admit to feeling less than comfortable with the looks of the new model.

The original took risks with its exterior and interior styling, which won over both critics and customers. The new model looks conventional in comparison with its rivals the Vauxhall Astra and Renault Megane. Perhaps Ford, in its current financial crisis, just couldn’t afford to take another risk. But the appeal of the Focus brand is more than skin deep. The original one excelled in terms of handling, comfort and reliability too.

So this one has quite a legacy to live up to.

It is very comfortable for both driver and passengers and was a good load carrier – to the point of feeling like a much larger car when on the motorway.

It is also a good load lugger, with the boot and back seats able to take enough luggage and food for a week of self-catering.

However, I have issues with the engine’s performance. At a cruising speed of 70mph, the 1.6-litre unit seems to rev too highly at about 3,500rpm, and the car is crying out for a sixth gear.

A colleague who also owns a 1.6-litre Focus complained of a similar feeling of unease when at motorway speeds in top gear.

The test mpg rate of our Focus is suffering, too. Like its previous driver, I’m getting 33.2mpg – a long way from the manufacturer’s combined rate of 43.8. I would defend my driving style too since because of the way the engine responds I do everything I can to keep it calm.

Another characteristic is that at very low speeds the car creaks like the boards beneath the Ancient Mariner. The noise appears to be coming from the front wheels but, while a little unnerving, does not appear to be a mechanical fault.

Despite my reservations, it looks as if it will take a ‘Focus eats kittens for breakfast’-type scandal to shift this car from the top of the sales charts.

I wrote a long-term road test in 2003 on a Focus, in which I highlighted the fact that the car had remained cemented at the top of the best-sellers’ list for 39 consecutive months.

The Society of Motor Manufacturers and Traders figures reveal that 2005 saw the Focus hold its place as the UK’s best-seller for the seventh year in a row and was also the top seller in every month of the year.

A total of 145,010 units were sold in 2005, comfortably trouncing the Astra with 108,461 and leaving the likes of the Renault Megane (87,093) and Volkswagen Golf (67,749) standing at the lights. Since launch, total Focus sales in the UK have reached 932,309 units. Despite its ubiquity, my unease about some of its characteristics remain. 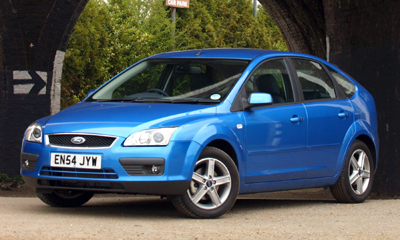