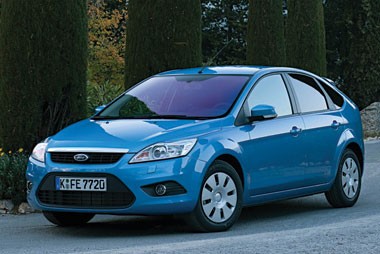 Some 20 years after Volkswagen Group first offered the stop-start concept on some models, manufacturers are now finally developing their own systems en masse.
The latest to market is Ford. Its ‘start-stop’ system (note the word switch, one for the marketeers) will be launched on the new Focus Econetic next February.
Available only on the 5-dr 1.6 TDCi variant, it promises CO2 emissions of just 99g/km and fuel efficiency of 74.2mpg.
This compares favourably to the standard 1.6-litre diesel Focus which returns 115g/km and 62.8mpg.
A non start-stop version of the Focus Econetic will also go on sale in 5dr and estate versions delivering 104g/km and 70.6mpg. It will be offered in two power outputs – 90PS and 109PS.
Both Econetic versions attract 100% writing down allowance and 13% benefit-in-kind tax, with the 99g/km model also qualifying for zero VED. Econetic becomes a range in its own right, although specification is close to the Zetec.
The cheaper non-start-stop model will attract more sales, mostly from fleets, with Ford estimating a “conservative 3%” of the Focus sales mix in year one. The start-stop version, which attracts a £500 premium at £19,995, will take just 0.5% due to unproved customer acceptance of the new technology. Sales will rise in year two and beyond.
Start-stop switches off the engine when the car is idling in neutral. Push the clutch in and the engine fires up quickly (officially in around 0.3 seconds) thanks to a beefed-up starter motor.
Extensive testing makes Ford confident that the starter motor will last just as long as a standard unit, despite the higher demands from constantly restarting the engine over its lifetime.
It adds that drivers will enjoy an efficiency gain even when the engine is switched off for just a couple of seconds. The system can be de-activated, for instance for hill starts if the driver wants to keep the engine running.
The Focus Econetic features an eco mode which taps into the telemetry to give drivers instant feedback on their efficiency.
The scoring system is divided into three parameters: gear shifting, which rewards points for quicker up shifts; anticipation, which assesses how smoothly you drive, accelerate and brake; and motorway driving, which rewards consistent speeds.
Drivers collect up to five petals for each of the elements as a reward for efficiency. Various encouraging messages come up on the display as a result of good driving.
Achieve three fives and the system praises you as an ‘eco champion’; none of the journalists on the press launch came close.
Me? I achieved four petals for gear shifting, four for anticipation and three for vehicle speed for a total of 11 out of 15.
In addition, the Focus achieved a credible fuel consumption of 62.7mpg over the 55-mile route of challenging bends and motorway stretches, against Ford’s 74.2mpg official figure.
Ford has lengthened the gearing in 3rd, 4th and 5th gear for greater fuel efficiency. It has also recalibrated the power steering to reduce energy usage and reduced the ride height by 10mm at the front and 8mm rear for improve aerodynamics.
The car rides on Michelin energy saving tyres with the same 15-inch steel aero wheels as the outgoing Econetic Focus, but 16-inch tyres will be available as an option. They will have a small impact on CO2 output and fuel efficiency, but not enough to change the official figures.
Other Econetic tricks include regenerative charging of the battery whenever it is fuel efficient to do so, usually when braking. A battery monitoring system constantly assesses the charge level – if it’s too low, it will prevent the engine from switching off.
The car also has a second, smaller battery which continues to power items like the aircon while the engine is off to protect voltage.
And Ford has designed a new alternator bracket and belt pulley – dubbed Low Tension Front End Accessory Drive technology - which reduces torque fluctuations. The means the belt requires less tension which reduces friction and, consequently, improves fuel consumption by 1%.
All these tricks are employed to lower the emissions level and improve fuel consumption.
Expect attractive running costs once the pricing guides have given their predictions – Ford is confident that residuals will be as good as, if not slightly higher than, the standard Focus.
Mark Simpson, Ford of Britain marketing director, told Fleet News: “Just driving well can improve fuel economy by up to 20%. If you have an economic car as well it makes a big difference for fleet costs.”