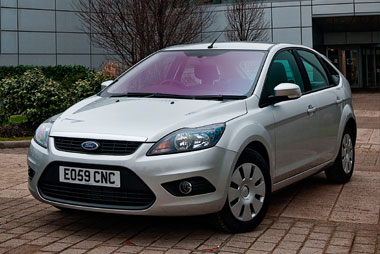 The best-selling car in the fleet market in 2009 comes in a wide variety of versions.

However, the newest variant to arrive in the UK is expected to take only a tiny fraction of sales.

The derivative in question is the latest version of the 1.6 TDCi Econetic with stop/start technology.

Part of the reason for Ford’s estimate of 0.5% of Focus sales volume in 2010 could be the fact that the standard Econetic (of which Ford expects to account for 3% of Focus volume this year) does a decent job and has a £500 P11D price advantage.

Yes, the Start-Stop may be VED-free, but the standard Econetic is also exempt from showroom tax and has VED of just £20 a year.

The stop/start system brings a fuel consumption advantage in the official tests and it looks significant on paper, with 74.2mpg versus 65.6mpg for the standard car.

Although it might not be possible to repeat the exact figures, which work out at 7.02ppm compared with 7.93ppm, it shows there should be a running cost advantage from choosing the Start-Stop version which may be enough to recoup the £500 higher list price over a typical fleet cycle.

However, it’s worth pointing out that if the car is run for less than 50,000 miles the Start-Stop version would fail to break even on the price premium.

Despite being in its run-out year, the Focus is a thoroughly competent car. Its on-road behaviour is first class.

The 1.6-litre diesel is refined and should be very frugal if treated gently. For the Econetic, fourth and fifth gears have been optimised for low fuel consumption, which also means lower rpm at high speeds and lower noise levels. It can sometimes catch you out – it’s more difficult to travel at 30mph in fourth gear than in the standard Focus 1.6 TDCi, with the engine starting to labour at the shallowest of inclines.

It comes with a decent level of kit, including dual-zone electronic climate control.

Sixteen-inch alloys can be chosen to replace the standard steel wheels for an extra £250.

But that brings us to the matter of the price. The on-the-road price for the stop/start Econetic is £20,445.

Compared with the Golf Bluemotion’s £18,685, this seems a little steep, and eye-watering compared to the Seat Leon Ecomotive S’s £16,745.

Of course, fleet deals will see a more favourable transaction price for the Focus, but it’s not such good news for the driver.

To book a test drive with the latest Ford Focus model, reserve your place at the Greener Company Car In Action today, for more information visit