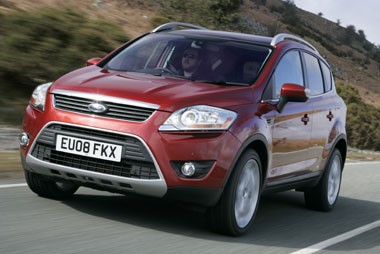 Ah, the Cougar – a much-maligned coupé when launched in 1998, but now Ford has a new version, which on the back of the new Mondeo should be quite a machine.

It… what? It’s not a coupé? Spelt differently? With a K, you say?

Ok, it seems the old Cougar is in no way related to the new Kuga.

The new machine is, rather, an entirely new crossover SUV, of the sort that seems to be en vogue at the moment.

This is Ford’s first foray into the crossover world and, like its various rivals, aims to combine on-road ability with at least nominal off-road prowess.

So what we have is the basic chassis of a Focus, which is an excellent place to start.

On to that, Ford has added intelligent all-wheel-drive (AWD), which drives the front wheels and automatically brings the rear wheels into play when needed.

The body follows the Mondeo and new Focus in deriving its styling from the ‘kinetic design’ concept.

In other words, it has the family face from a Focus and a Mondeo, which is no bad thing.

Spines across the bonnet and down the flanks give it an athletic air, while the rising side window lines provide a certain static dynamism.

“Handsome and sporty” says Ford, and while I’d hesitate to call any car handsome, it seems a pretty accurate description.

There are two trim levels – Zetec and Titanium.

The engine range consists solely of a 2.0-litre Duratorq TDCi diesel unit, which produces 134bhp and emits 169g/km of CO2, which Ford says is the best in class when it comes to vehicles with intelligent AWD.

Being a modern car, there is a plethora of acronyms to plough through.

As well as ESP and ABS, the Kuga also comes with TSA – trailer stability assist – which helps keep things on the road should your trailer or caravan get a case of the wobbles.

ARM (anti-rollover mitigation) is also included as part of the ESP system.

The Kuga really will go off road, Ford says, although it didn’t give journalists the chance to test the claims at the launch event.

The reason for that, according to Roelant de Waard, Ford of Britain’s chairman and chief executive, is that very few people will actually put it through its paces.

Ford said the Kuga is capable of tackling slopes of up to 21 degrees, but unlike some of its rivals it doesn’t feature rock-scrambling technology such as hill descent control.

“That’s not where this customer group intends to take the vehicle,” Mr de Waard said.

“But we know that it’s capable of much more.

“We will see the same people that are into compact SUVs and crossovers but equally we will see people attracted to the design who previously rejected a boxier, more functional vehicle.”

Ford sees the Kuga as an emotional purchase rather than a rational one, and consequently expects more retail sales than fleet – around 66%.

Total sales are expected to be about 7,000 a year.

“Fleets have an equal interest in emotional vehicles but it has to be financially attractive as well,” Mr de Waard said.

“I wouldn’t be surprised it we still see a significant amount of user-chooser and contract hire business because the monthly costs are still attractive.”

In the metal, the Kuga is a handsome beast, by far the best looking of the crossover bunch.

It looks dynamic, but does it drive in the same way?

As far as high SUV-type vehicles go, with their high centre of gravity, the Kuga is as good as anything else out there and a lot better than most.

It holds the road well and the pitching and rolling into corners is kept to a minimum, although it does move about more than something like an estate car.

But having its roots in the excellent Focus chassis means it’s nimble and surefooted in pretty much all driving conditions.

On the motorway, it’s smooth and refined in its ride quality, and tackles bends with aplomb.

The driving position is a high, commanding one, which is a little at odds with the concept of a driver’s car, but this seems to be what crossover drivers like most about this type of vehicle.

It also doesn’t feel too much as if you’re piloting a ferry – the seating position feels natural and car-like and the wheel isn’t too big, fat or flatly positioned.

Build quality in the German-manufactured car is very good, with a solid feel to everything and high-quality materials.

The engine is more than adequate, although I’d prefer a little more power, and the gearbox is precise and well weighted if a little long in the throw.

The Kuga has got the balance between on-road dynamics and light off-road capability just right.

It is very close to being estate car-like on the Tarmac, and should be able to tackle bumpier terrain well.

It boasts decent equipment, economy and emissions. The only complaint I have is its unoriginal name.