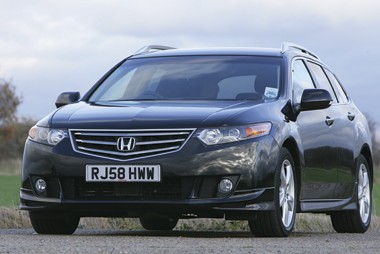 Expectations were high when the Accord Tourer arrived. Here is an estate that, claims Honda, will challenge the benchmark BMW 3 Series Touring.

That means the dynamic drive, the practicality, the premium feel and the solid residuals for about £2,000 less.

An initial drive confirmed this is going to be a fun car to be behind the wheel of. Honda’s work to ensure this model is a significant improvement in terms of driver enjoyment over the outgoing model has paid off.

Initial impressions also confirm that the designers appear to have succeeded in making the car sleeker, lower and sportier.
However, things came unstuck when I asked the car to deliver what its estate body promised.

What became instantly obvious is that the designers have compromised space for looks.

The rear seats feel cramped and with the driver’s seat positioned to accommodate my average (under 6ft) frame, it is difficult for an adult to sit behind.

With two child seats fitted, there is no room for a third adult passenger.

Our children have already begun resting their feet on the backs of the front seats, which could be excused if they were lanky teenagers, but they are toddlers.

This estate also has just 406 litres of luggage space, which is 61 litres less than the Accord saloon and 60 less than the
3 Series Touring.

To put this in perspective, its smaller, hatchback brother, the Civic, boasts 79 litres more, while a comparable estate such as Ford’s Mondeo has a massive 136 litres of additional capacity, as well as more room for passengers.

According to Honda’s marketing, the new Accord Tourer gives “the reassurance that whatever you are carrying comfortably fits within the generous space”.

Unfortunately, it doesn’t. I tried to load a typical, dismantled baby cot I was selling into the boot but it wouldn’t fit, resulting in an embarrassing call to the new owner asking her to come and collect it in her Ford Focus.

However, taking the latest 3 Series Touring for a test revealed that despite its boot offering more overall load space, it is also less than generous and could not, unlike the Accord, accommodate our twin’s buggy.

Call me old-fashioned, but isn’t the point of a tourer or estate the added practicality that its additional space brings?

Let’s hope the promise of dynamic performance from the chassis, the frugality of the 2.2-litre diesel and the executive feel to the build quality make up for the lack of interior space and the possibility that, should we go away from the weekend, we may have to hire a trailer.

The new Accord was developed to further promote Honda as a credible rival to traditional premium brands.

It’s muscular design and abundant specification gives it a huge value win over rivals and, in the current economic climate where fleet buyers are coveting both desirability and value, the Accord is certainly a car for its time.

Fleet sales will account for 70% of the range with the 2.2 i-DTEC ES GT and 2.2 i-DTEC EX the preferred choices. At its launch, the Accord delivered Honda’s largest ever increase in residual value over a predecessor, making it a great buy in terms of wholelife cost.