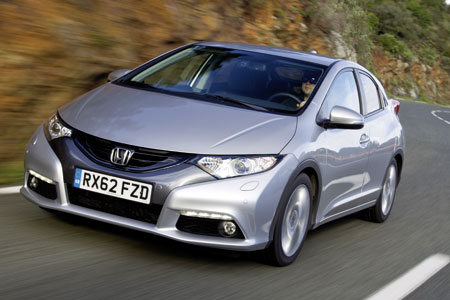 Japanese car manufacturers can sometimes be rightfully accused of being slow to react to the needs of European customers.

For Toyota and Honda, both pioneers in developing petrol-electric hybrid vehicles, healthy sales in North America where hybrid powertrains are popular would perhaps have outweighed the appetite to develop a range of class-leading diesels in Europe.

Honda didn’t produce its own diesel engine until 2003. It was launched in the Accord early in 2004) and was a 2.2-litre. Fine for the Accord and CR-V at the time, but the landscape has evolved in Europe, and particularly in the UK, as a result of CO2 emissions-based tax.

Diesel engines take a 58% share of the lower-medium sector in Europe, and 45% of cars in the sector have CO2 emissions of 120g/km or lower. This percentage is expected to increase as incentives encourage drivers to choose less polluting vehicles.

One of the easiest ways to produce lower CO2 emissions is to use a smaller capacity engine, and Honda has now introduced a new 1.6-litre i-DTEC diesel in the Civic range. Just as Honda’s first diesel came with an impressive set of vital statistics in 2004, the 1.6 is also remarkable.

While CO2 emissions of 94g/km might not seem unusual, even in this sector in 2013, combining it with 120bhp in a mainstream model rather than a specific ‘green’ variant is a significant achievement.

The engine is more than 40kg lighter than the 2.2-litre diesel and when combined with the new gearbox, the powertrain is 54kg lighter in total.

It does feel more agile than a typical front-wheel drive diesel hatchback, and engine noise is less intrusive than on the early prototype we tried early in November.

With peak torque of 221lb-ft kicking in at 2,000rpm the Civic is also much more responsive than a typical 1.6-litre diesel hatchback too.

A Golf 1.6 TDI can muster 184lb-ft, while a 115bhp Ford Focus 1.6 TDCi tops out at 199lb-ft.
While the new Golf has already won plaudits for class-leading residual values, Honda believes the extra performance of the Civic combined with class-leading low fuel consumption and competitive SMR will make the car an equally compelling proposition for fleets.

Honda’s plans for the UK-built engine will see its installation in the new Civic Tourer due later this year as well as the Honda CR-V for 2014. If it succeeds in winning back fleet business, then its timing is not a moment too soon for Honda.