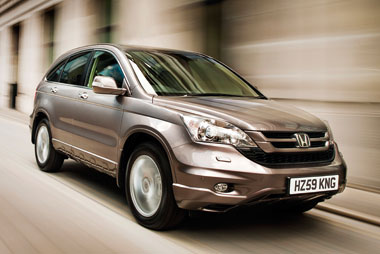 Over the past few weeks, I have discovered that our long-term Honda CR-V is the 4x4 that goes further.

Having eked 500 miles out of a tank of fuel on our 2.2-litre i-DTEC ES-T model recently, I was delighted to discover this equated to 45mpg.

The sublime 150bhp diesel engine takes much of the credit for this sterling green performance, but a conservative driving style also helped in beating the official 43.5mpg fuel economy figure.

The performance is all the more commendable when you consider that our long-term Honda Insight hybrid was also achieving just 45mpg during its time with us, compared to an expected return of 61.4mpg.

It’s not exactly a level playing field, as the Insight is a petrol-engined automatic and the CR-V is a diesel, but even so, it goes to show that your choice doesn’t have to be limited if you want to keep fuel costs down, especially as the CR-V weighs in at 1.7 tonnes and has more space and flexibility compared to the smaller 1.2-tonne Insight.

However, this strong on-road performance has to be considered alongside the black and white reality of the accountant’s balance sheet and here the CR-V falters.

With CO2 emissions of 171g/km, it falls on the wrong side of the key 160g/km cut off point for enhanced capital allowances.

Furthermore, the high emissions figure puts the CR-V into the 26% company car tax band, rising to 27% in the next tax year.

I recently swapped into the Hyundai ix35 for a short-time and the paper calculations make compelling reading.

It looked pretty good in the metal compared to the Honda too, with a more imposing exterior and an interior that felt more up to date and modern.

Yet despite this, on the road I struggled to reach 35mpg in the Hyundai, compared to its Honda-beating official figure of 48.7mpg.

Indeed, overall the Honda’s performance on the road was much more composed than the Hyundai.

It remained flatter in corners, accelerated more smoothly and quietly and filtered out road bumps and noise much more effectively.

Behind the wheel, the Honda cruises into first place, but it would be difficult for a company car driver – and a fleet manager – to see past the disappointing figures when making comparisons.