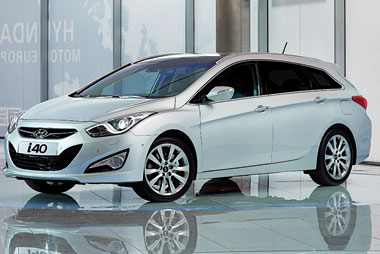 Functionality is arguably the primary driver of the fleet market; if a car satiates certain tax and practicality demands, it’s likely to succeed.

Combine functionality with desirability, though, and you’ve got a hit. Just look at Apple.

The i40 is Hyundai’s iPad. Well, that’s what the company thinks it is.

You’ll probably agree it’s a handsome thing, even as an estate – the saloon will be launched later this year – and when it goes on sale in September the Blue Drive eco version will boast best-in-class CO2 emissions. And almost best-in-class practicality.

The i30 hatchback began Hyundai’s trickle into the fleet market, and now, senior vice-president Allan Rushforth told Fleet News, the tide is about to turn.

“Prior to last year, Hyundai’s single biggest fleet order was 250 cars,” he says.

“Hyundai is quite young and immature in terms of the fleet market, selling cars to SMEs rather than big companies. But that’s before i40 orders.”

This optimism is based not only on Rushforth’s proclamation of the i40 as Hyundai’s “first serious D-segment competitor,” but also the company’s belief that this is its best car ever.

The cynic might suggest that’s not too difficult a prize for the i40 to take, but our first drive of a late pre-production car reveals the i40 will become a serious alternative to the cluster of perfectly agreeable D-segment cars already available.

For a start it feels spacious, particularly rearward, with plenty of rear legroom and a large boot.

The cabin quality falls slightly short of the class-leading Ford Mondeo’s, but the dashboard is designed with a neat balance of style and intuitiveness.

Hyundai is still choosing between two suspension set-ups, one softer and perhaps more agreeable for high-mileage users, the other firmer, sportier, in the Mondeo mould.

The latter makes the i40 genuinely involving to drive, and it’s the one we prefer – though that’s without having tried it on a pothole-infested UK back road.

Either way the i40 will offer cost effectiveness – at launch, the lowest emitting Blue Drive eco version will have lowest-in-class 113g/km CO2 emissions.

We drove the 136bhp version, with 124g/km. It’s not particularly quick and can get a little coarse when pushed hard, but it is very quiet at idle and cruising speed.

So, big, good looking and, hopefully, cheap (prices are to be confirmed but are likely to start at around £20,000).

For the time being, Hyundai’s confidence seems well placed.