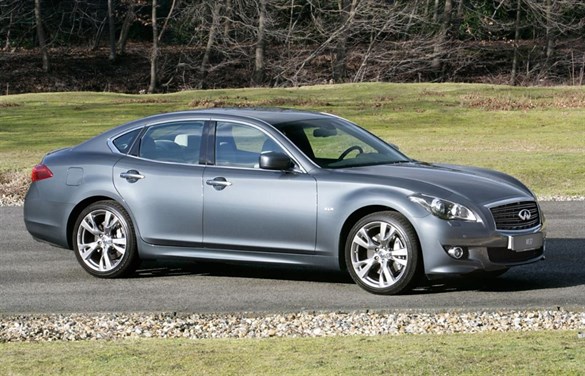 Tight security at Nissan’s technical centre at Cranfield resulted in a series of tough questions at the gate via the intercom.

After about six, I was let through and made my way to a small parking area at the visitors’ reception.

Hidden in a discreet corner near the entrance was the only working prototype of the new Infiniti M30d – a car to rival the BMW 530d and Jaguar XF 3.0D – its Moonlight White metallic paint finish spoiled only by a exuberant application masking tape over parts of the front and rear quarters.

Fleet News has been given privileged access to the car: Infiniti has allowed only one motoring publication per country to sample the prototype, and the UK’s allocation had already been taken up by a weekly consumer magazine.

However, recognising the importance of this car fitted with the diesel engine to the corporate market, the Japanese luxury car brand invited Fleet News to sample this engine before diesel Infinitis reach our shores.

Infiniti launched in the UK in September 2009, and currently has one centre in Reading. More will follow this year, in London, Birmingham and Glasgow, and fleet customers – and company car drivers – are promised the same high levels of service and one-to-one attention lavished on retail customers.

Its range of luxury cars are probably best put into context in relation to vehicles from other manufacturers: the G range of saloons, coupés and convertibles are alternatives to equivalent BMW 3 Series models; the EX 4x4/coupe crossover shares some similarities with the BMW X3, while the larger FX is aligned to the BMW X5/X6.

The M saloon is likely to be the key range for the corporate market. The petrol version will arrive in the UK in September, with the diesel a month later.

Infiniti claims the range’s ‘CO2 champion’ will be the M35 Hybrid due in April 2011, but the M30d should begin to gain the attention of a few fleet customers.

Infiniti being the luxury car arm of Nissan, the diesel engine is a version of the Renault-Nissan Alliance V6. It has undergone a number of modifications for its use in Infiniti models, including unique turbocharger, crank case, oil pump, inlet manifold and fuel injectors.

Tim Crane, who has been developing the vehicle in the UK, says although the engine was already refined, further changes were needed to make it suitable for Infiniti customers.

The 238bhp engine produces the highest amount of torque currently offered in a single turbo V6 at 406 lb-ft, while the aerodynamics are class-leading for a six-cylinder saloon.

All versions will come with high levels of equipment, and there will be a choice of GT or S grades, both available with Premium upgrade pack.

Unlike some cars in this class, choosing S over GT results in some serious chassis upgrades including four-wheel steering and adaptive damping.

A brace of safety features are available including a lane departure warning system that can activate individual brakes as a last resort to prevent a car veering into another lane, and technology that pushed the accelerator pedal back at your right foot if you get too close to the vehicle in front.

Forest Air is more natural ventilation with pulsating fans to mimic a breeze and which leaves some moisture in the air.

On the road the M30d feels very impressive. The diesel engine is remarkably unobtrusive, and under acceleration it’s more obvious that it’s a six-cylinder engine rather than a diesel.

It comes with an ‘Eco’ setting that limits maximum torque and favours earlier upshifts for use around town and can result in a typical fuel saving of about 10% compared with the default mode.

It is an involving drive with a traditional hydraulic steering set up, feeling sharp and with excellent feedback. The seven-speed automatic transmission is always ready with the right gear, and the M30d always feels composed whatever the environment.

Verdict
It remains to be seen how the M30d stacks up against rivals on costs, but with a CO2 emissions target of less than 200g/km (plus a lower CO2 hybrid on the way), it seems Infiniti will have a thoroughly competent offering for those daring to be different.