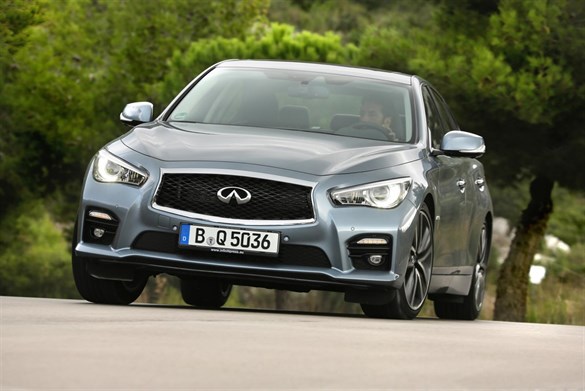 The Q50 is the first of the new generation of  Q models (which take their name from Infiniti’s first model, the Q45). Infiniti describes it as a key model for the fleet sector, broadening the premium brand’s appeal from chief executive level to management and senior management.

With emissions from 114g/km for the 2.2-litre diesel, the Q50 gives Infiniti a fighting chance of appearing on fleet choice lists that cap CO2.

However, the hybrid version, which emits 144g/km with an official combined fuel economy of 45.6mpg, is less about the environmental credentials. The 3.5-litre petrol/electric hybrid drivetrain helps the Q50 to fare well in the high-performance stakes, too.

Its V6 engine, combined with electric power, produces 364hp which provides 0-62mph acceleration of 5.1 seconds and a top speed of 155mph.

For this reason we have discounted the Lexus IS 300h as one of the Q50’s key rivals. The IS 300h is an alternative to a four-cylinder diesel and falls into a different price band.

Driving performance of the Q50 hybrid can be monitored via one of six preloaded apps.

As well as the ability to monitor g-force and fuel flow, its other apps are maintenance note (which records everything from tyre pressures to the car’s complete service history), inbox, calendar, clock and compass.

Infiniti has set up its own app store, App Garage, with more apps available over time.

The Q50 features a dual touchscreen on the centre console (designed to declutter the dashboard). The apps appear on the lower seven-inch screen while the top eight-inch screen is reserved for satellite navigation.

Safety technology on the Q50 is impressive, although pricey. Its forward collision warning system (available as part of the safety shield pack, which costs £2,080 including VAT) doesn’t just react to the speed/distance of the car in front; it reacts to the car in front of that, too.

Infiniti’s lane-keeping system, Active Lane Control (ALC), which is standard on the Q50 hybrid, uses a camera to detect the lane the vehicle is travelling in with the information processed and relayed to the steering control unit to make any necessary corrections.

The driver can set the level of ALC intervention to ‘mild’ or ‘full’.

Infiniti said that tests have shown that the driver’s circulation is improved by 15% compared to using a normal seat, allowing them to travel long distances without discomfort.

A negative side of choosing this hybrid over a traditionally-fuelled Q50 is that the bootspace is 310 litres compared to 400 litres for the standard model.

A campaign to help Audi achieve a clean sweep in UK executive motoring is set to reach its climax in the next two months.