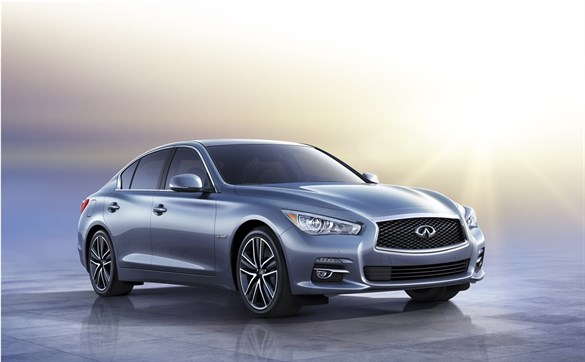 Premium-sector cars typically have a high proportion of corporate sales, as a choice of efficient diesel engines, strong residual values and brand image makes them popular with both fleet operators and user-choosers.

When Infiniti (Nissan’s upmarket brand) arrived in the UK in 2007, many of those key ingredients were missing. As a new brand, it was always going to take a little time for potential customers to understand its place in the market, but it had no diesel engines and a tiny sales network.

Sales aspirations were low for the first few years, and Infiniti said it wanted to establish itself as a ‘performance’ brand initially, hence the range of petrol-only V6 and V8 engines.

A V6 diesel came later (produced by the French division of the Renault-Nissan Alliance) that was strong on performance, but woefully inadequate on CO2 emissions and fuel consumption.

A petrol-electric hybrid in Infiniti’s BMW 5 Series rival came next, which was more attractive for fleets, but there was nothing that looked like it may deliver any kind of sustainable business strategy.

Following its technology-sharing partnership with Mercedes-Benz, the first sign that Infiniti was ready to bring fleet-friendly products to market came late last year.

The Q50 will compete with the BMW 3 Series and Audi A4, using a four-cylinder Mercedes-Benz diesel engine that delivers competitive CO2 emissions and fuel consumption.

The 2.1-litre engine is in the same specification as Mercedes-Benz’s C220 CDI, producing 170hp, while CO2 emissions are just one BIK tax band higher than the BMW 320d EfficientDynamics saloon.

The Q50 is an attractive car, its seductive curves making it stand out from the more sober German options in the sector. Its dimensions make it longer than most rivals, giving it a more elegant profile.

Interior quality is good enough to compete with the A4 and Lexus IS, while the dashboard is free from clutter, thanks to a dual touch-screen layout. Many functions are accessed via the screens rather than dashboard buttons.

The diesel engine has a rather gruff note (although historically it has the same characteristics in Mercedes- Benz models), with the 320d and A4 diesels offering better sound insulation, and dynamically the Q50 is a step away from what the best rivals can offer in driving engagement.

But it’s a positive step for Infiniti, and isn’t so far behind rivals on costs that it becomes an irrational choice. Cars such as the 3 Series and A4 are now ubiquitous, so there is some appeal in being different.