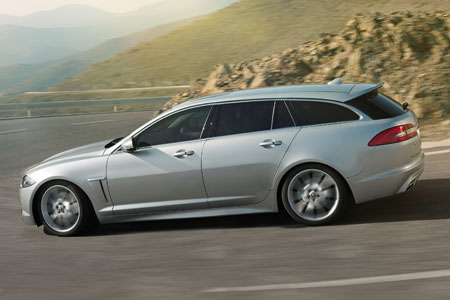 Jaguar has unveiled its second only estate car, the XF Sportbrake, based on its acclaimed XF sporting saloon.

And on first appearances, the design gurus at Whitley Engineering Centre, just outside Coventry, have definitely managed to balance style and practicality in creating this new addition to the family.

The XF Sportbrake builds on the extensive refresh received by the saloon for the 2012 model year, which also saw it launch the fleet-friendly 2.2-litre diesel.

“We are very proud of what we’ve achieved with the design,” said Wayne Burgess, studio director at Jaguar Design. “The brief for the project was to offer an estate car that was fully useable, had a fully-competitive load carrying capacity and would be a good viable alternative to the product offerings available from Audi, BMW and Mercedes-Benz.”

A full five-seater with an additional 48mm of rear headroom compared to the saloon, remote-fold levers situated just inside the tailgate allow the rear seats to be folded down with just one touch to provide an uninterrupted load surface that is 1,970mm in length.

The central portion of the load-space floor can be lifted to reveal an extra, hidden storage compartment, which without the spare wheel helps create an overall load space of 1,675 litres.

That’s five litres less than the Audi A6 Avant and five litres more than the BMW 5 Series Touring. However, the XF Sportbrake can’t match the Mercedes-Benz E-Class Estate with its massive 1,950-litre load bay.

Fleet News was invited to have an early look at the design model, but Jaguar is in the process of building the first actual cars for further testing before arriving in showrooms from November. It hopes that the Sportbrake will help boost sales further after selling more than 10,000 XF units in 2011, but Jaguar refused to be drawn on specific sales targets, simply saying that it expects the XF Sportbrake to account for around 20% of XF sales.

It will be fitted with Jaguar’s range of four-cylinder 2.2-litre and V6 3.0-litre diesel engines, with the 2.2-litre variant expecting to take the lion’s share of orders.

The eight-speed gearbox will be mated to Jaguar’s intelligent stop-start system, which in the saloon offers emissions of 149g/km and 52.3 mpg (although our long-term test car is struggling to meet this figure).

Every derivative of the XF Sportbrake will be fitted as standard with self-levelling air suspension at the rear to replace coil springs fitted to the saloon.
This system has been developed and tuned to ensure the XF Sportbrake offers identical dynamic attributes in terms of ride and handling as the saloon, while keeping the car level even when fully laden.

Andy Whyman, chief programme engineer for the XF and XF Sportbrake, said: “It’s ride, its steering, its handling, the powertrain sound quality – all of the driven attributes for the car – are the same for the estate.”

No pricing details have yet been released, but the entry-level XF has a P11D price in the region of £30,000, so expect a premium of around £2,000 considering the premiums paid for 5 Series Touring and A6 Avant over their saloon siblings.