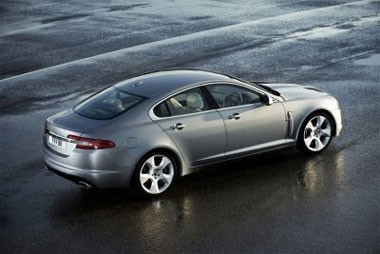 The front grille of the new Jaguar XF is inspired by that of the 1968 Jaguar XJ6, according to the company's director of design, Ian Callum, but that's the only thing that's remotely historic about the new car.

In every other respect the new four-door saloon aimed at the BMW 5 Series, Mercedes-Benz E-Class, Audi A6 sector of the market is a new launch pad for the company as it attempts to rebuild its reputation for making fast, beautiful cars.

"This car is absolutely crucial to us as a company," said Jaguar managing director, Mike O'Driscoll.

"The company has been through a tough time over the last 10 years. We started getting things right two years ago with the new XK and we are continuing that strong progress."

The XF made its world debut in September at the Frankfurt Motor Show but by the time it goes on sale in March, Jaguar, and its partner Land Rover, are expected to have been sold by the struggling Ford Motor Company, most likely to the Tata Group from India, according to current internal rumours.

O'Driscoll is at pains to point out that the company is no longer chasing volume, trying to do a BMW or a Mercedes, each of which sells about 1.25 million cars a year, and cites the example of Porsche which, though it only makes 100,000 cars a year, has become financially strong enough to take control of Volkswagen. 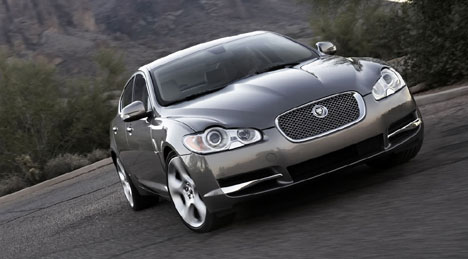 With Land Rover breaking through the 200,000 a year sales mark, and Jaguar scheduled to sell nearly 70,000 cars this year O'Driscoll believes the company has a strong financial future ahead of it, even though the Detroit News estimated at the beginning of the year Jaguar had lost more than £715 million in 2006.

As usual with a Callum design the XF looks far more striking in real life than in pictures and the interior lives up to the promise of the exterior.

Naturally there is still lots of wood and leather, but used in a more modern way, and along with aluminium and phosphor blue mood lighting on doors and round switches - like on a Motorola Razor mobile phone - the XF feels totally contemporary.

Despite the coupe looks, boot space is significantly better than the S-Type's and can be increased by folding down the backs of the rear seats.

Engines are carried over from current models, starting with a 203bhp 2.7 litre V6 diesel, likely to be the best seller at £33,900 in luxury trim and in road tax band F thanks to its 199g/km CO2 emissions.

Up to five mobile phones can be paired to the car via Bluetooth and iPod tracks can be chosen and played via the central dashboard touch sensitive screen.

Optional features include a blind spot warning system which alerts the driver if a vehicle is alongside but not visible in the door or interior mirror.

Partly because Jaguar says it won't go chasing volume, residual value companies CAP and EurotaxGlass's have predicted 50% residuals for the diesel after 36 months/36,000 miles and 45% for the 3-litre petrol - both values superior to its German rivals.

Jaguar all ready has 5,000 orders for the new car, 3,000 of them in the UK, even though prices have only just been announced in some overseas markets.

Jaguar saloons have always had a cockpit feel, and often a bit too cosy if the truth be told, but that isn't the case with the new XF which despite its dynamic coupe looks provides a spaciously airy yet cosseting environment.

Automatic transmission is standard on all versions because steering wheel mounted paddles make manual over-ride so easy and so natural that a conventional manual gearbox is deemed unnecessary for driver fun.

Close the door, press the glowing red starter button and the car "wakes up," its rotary gear selector rising out of the centre console and the four dashboard air vents motoring into their open position.

Engines are carried over, but only the 4.2 litre petrol versions with 300bhp (normally aspirated) and 420bhp (supercharged) were available for this early drive in Arizona.

Both versions of what is the most aerodynamically streamlined Jaguar of all-time were whisper quiet at speed but with pleasing growls from engine and exhaust when accelerating hard.

High speed stability was excellent through sweeping curves and the car takes a nice 'set' when you turn into a corner with the slightly lighter on the nose non-supercharged model feeling fractionally more nimble.

Ride comfort on these pretty smooth roads was very good though the faster car on lower profile tyres (?) was a bit lumpier at low speed round town.

Lots of car manufacturers claim to combine the comfort of luxury saloons with sports car agility but with these two versions of the XF tried so far Jaguar has achieved a near perfect blend. Now, even if you have children your fun driving days aren't over.