SOME of you may remember that in the 1980s, a band called The Beastie Boys unwittingly caused thousands of Volks-wagen badges to be stolen from the grilles of cars.

Instead of gracing the fronts of Passats and Golfs as they should do, they were ripped out and worn as pendants by, well, car vandals.

While some may accuse me of being too old to be up to date with the latest New York hip hop crazes, my recent perusal of Q magazine hasn’t enlightened me to a new band encouraging their followers to steal XJ6 badges from the rear of Jaguars.

So I’m at a bit of a loss as to why someone has taken it upon himself (I assume it’s a he) to prise the badge off the back of our long-term test car.

And as it’s such an upper-class car I’m at a loss as to which modern day singer could spark such a craze among their fans– although a quick internet search reveals that supermodel Kate Moss’s former beau Pete Doherty is a big fan of the marque, so much so that he likes to pull over on London streets to let the local constabulary have a look at his.

Thankfully, the removal of the badge has caused no damage – not that the vandal cared about that, I’m sure.

In my last test report, I promised I would update you on a couple of problems I had experienced with the XJ6.

One was a warning light that came on once suggesting the car was in ‘limp home’ mode but disappeared once the engine had been switched off and then on again. 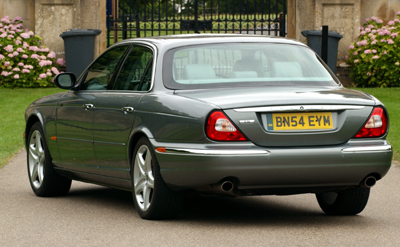 The other was that the automatic locking function on the key fob started working only intermittently.

It meant I had to manually lock and unlock the doors and then get my key in the ignition quickly as I entered the car so the alarm wouldn’t go off.

I’m pleased to report that since then neither problem has reappeared.

However, editor Martyn Moore, who is now in possession of the car, mentioned the other day that he’d had trouble getting it started one morning.

The car is now booked in for its 20,000-mile service so no doubt we’ll hear if there is something wrong.

During my time with the Jag, I made a couple of round trips of more than 300 miles and it was an absolute pleasure to drive. A company executive with one of these cars can be safe in the knowledge that they can plough through motorway miles and arrive at their destination fresh and with no backaches.

Despite its enormous exterior, the cabin is compact and the steering light, so even squeezing it into a car park space can be a breeze, particularly aided by the parking sensors.