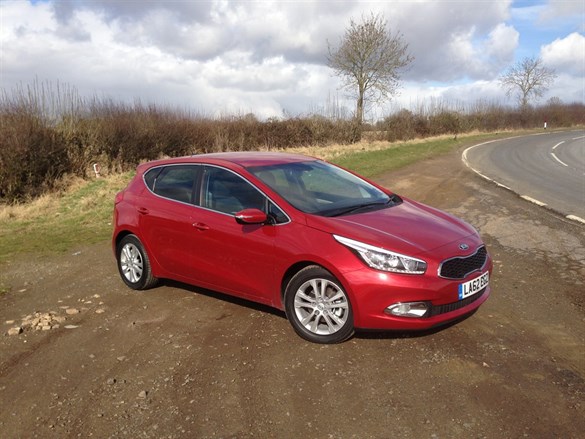 My colleague Sarah Tooze was reluctant to hand over the keys to the Ceed when it was my turn to spend some time with it.

And I can see why – it’s comfortable, efficient and has a great deal of standard equipment.

I also suspect she quite liked how it looked – because most people do. Kia’s design boss Peter Schreyer is the man behind the design of the original Audi TT and, more recently, redesigning the Kia line-up and implementing the tiger nose face as seen across the current range.

But looks are massively subjective and I apologise Mr Schreyer, but I think the Ceed looks ghastly.

Well done to Kia for being brave enough to inject some personality into the Ceed, which is more than its rivals have managed (ahem, Volkswagen Golf).

And I don’t think the awful placenta colour of our test car helps.

All I’m saying is that I’ve found myself parking the Ceed further down our street so I don’t have to look at it out of my window.

The Ceed’s handling appears to be another controversial subject, with my peers on other publications slating it.

If you enjoy the occasional lift-off oversteer and like to fling your family hatchback down twisty B-roads, the Ceed won’t put a grin on your face.

However, driving in a manner that doesn’t put your licence at risk, it handles perfectly well.

If you can get on with the Ceed’s looks, then it should definitely be considered. But please, I beg you, don’t bother if you live near me.

The Golf is much easier on the eye.