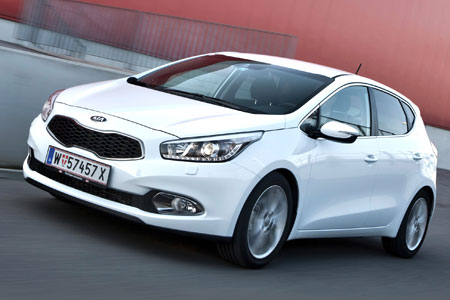 Five years ago I attended the media launch of the Kia Ceed, which was being acclaimed as a massive step forward for the Korean brand for quality, technology, styling and driver appeal.

It was a car that lifted the former budget brand among the mainstream, and with its seven-year warranty, there was a headline-grabbing reason for car buyers to pay it attention.

Since its development, Kia has enlisted a top car designer in Peter Schreyer whose latest products, the Sportage, Rio and Optima, have stolen the spotlight at motor shows where they were unveiled.

And 2012 is the year of the second-generation Ceed. But although the appearance has improved to a more defined and solid looking hatchback, it lacks the visual impact of the other recent Kias, and the new Hyundai i30, with which it shares a platform.

But perhaps the most remarkable aspect of the new Ceed is its interior. Kia benchmarked what it describes as ‘near premium’ brands when it came to interior quality.

It’s probably safe to assume the main benchmark car was the Golf and, specific design details aside, the materials could have come from a Volkswagen.

Everything about the interior feels as though it comes from the top-end of mainstream hatchbacks, and some of the features available on top models include a full LCD speedometer, large touch-screen navigation system and electronic parking brake.

Lower down the range variants use conventional alternatives, but there is a consistent quality feel across the whole range. There will be four main equipment grades, numbered from one to four, but at the top of the range will sit 4 Tech, which will include some of the hi-tech items as a variant in its own right. This will add greater certainty to the value of these cars when they are defleeted, giving them their own entry in price guides rather than if the items were merely fitted as options.

The Ceed’s engine line-up might have a familiar look, but much is new.

The 1.6-litre petrol engine is the GDI variant found in the Sportage. The refined 135bhp engine achieves CO2 emissions of 119g/km and fuel consumption of 56.5mpg – a set of figures close to what Ford has achieved with the three-cylinder Ecoboost petrol engine in the Focus but without downsizing and a turbo.

However, this normally-aspirated engine lacks the torque and the mid-range response of the Ford.

Better is the 1.6-litre diesel engine which produces either 110bhp or 128bhp. With the EcoDynamics pack it achieves 97g/km and 76.3mpg. We tried the higher power variant, which provides effortless performance as well as impressive refinement, and illustrates how Kia and its Hyundai sister brand have pushed development of diesel engines as critical to its success in Europe – a lesson some Japanese brands are only now coming to terms with.

The Ceed can seat five comfortably, while its boot space is among the best in the class.

Our high-specification test cars featured three settings for the steering, varying the level of assistance. It means a lighter set-up can be chosen if drivers have a lot of low-speed manoeuvres as part of their daily routine, or more resistance if drivers like that kind of steering.

None of the three settings really compensate for a lack of feedback in the steering set-up, but no one should really care.

The Ceed will be largely a job-need car in fleet, and this shouldn’t be a deal-breaker as few other cars in this sector will be discernibly better.

For the most part the Ceed is an impressive car on the road, and a comfortable vehicle to travel in for driver and passengers.

Compared with its predecessor, it’s one that can absolutely compete with mainstream rivals on its merits, without the need for a headline-grabbing seven-year warranty. The fact that it also has this is yet another reason for making it a rational choice.