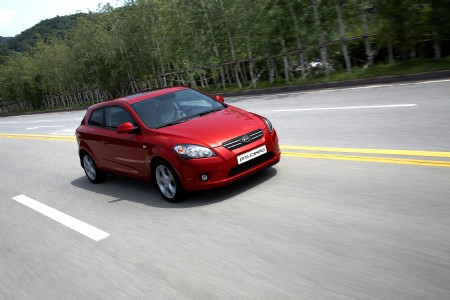 A little is expected to mean a lot when Kia starts driving its Pro_cee’d out on to British roads.

Just 2,000 examples are due to leave showrooms over the next 11 months, but hopes are high that the new range will work wonders for the Korean company’s profile in the fleet market.

Sales director Yaser Sabsogh said: “Our decision to put more emphasis on retail business means we will sell only a fraction of these models into the fleet sector.

"But we believe they will still make a big impact with user-chooser buyers.”

He added: “Sleeker styling, improved driving dynamics and sharper handling characteristics are all necessary if a product is going to appeal to the younger drivers we want to attract.

“We’ve made sure the Pro_cee’d has all the attributes it needs.

"This is a flagship range that delivers a taste of what we aim to roll out over the next few years as we make all our models more dynamic."

Mr Shabsogh said the Cee’d hatchback, on which this model is based, had been perceived as lacking in excitement and sporty appeal.

“We see the Pro_cee’d as an attractive proposition for the growing number of people who have young families and for empty-nesters.

"This is the car that will bring in the new customers we’re seeking,” he said.

Europe’s only three-door car with a seven-year, 100,000-mile engine and transmission warranty, the Pro_cee’d is longer, lower and lighter than the five-door model and its new bodywork shares only the bonnet and front wings with the Cee’d.

“Most three-door cars are sold as cheaper versions of five-door models but we’ve taken the decision to price the Pro_cee’d on a par with the Cee’d, despite the fact that it looks more distinctive, has a more upmarket air and comes with particularly generous specification levels,” Mr Shabsogh explained.

“If this car wins second glances from people who have never considered buying a Kia, we will rate it as a resounding success because wider recognition is an important part of our plan to reach total annual registrations of 50,000 by 2010.”

With a 30mm lower roofline and bigger side doors, the Pro_cee’d has a squat, chiselled look that neatly emphasises its wide track at the rear and results in a shape that appears attractive, if a tad conservative, from any angle.

The downside of the styling is reduced headroom, but it still allows 6ft 2in occupants to sit comfortably front and back.

Once inside, the bench seat is spacious and legroom is also generous, making this practical long-distance transport, particularly as the boot has a useful 340-litre capacity when the 60/40 split seat backrest is in use.

Trim levels are 2, 3 and Sport and alloy wheels and air conditioning are standard across the range.

Seven versions are powered by a choice of 1.4 and 1.6-litre petrol engines and three diesel engines up to 2.0 litres, but the £11,795 1.4 will not be available until September.

A six-speed manual transmission comes with the 2.0-litre engine, but five-speeds are fitted on other models and a four-speed auto box is a £1,000 option on the 1.6-litre petrol car.

For the time being, the £12,295 1.6-litre petrol is the entry-level Pro_cee’d, featuring 16-inch wheels, front fog lamps and iPod compatibility. 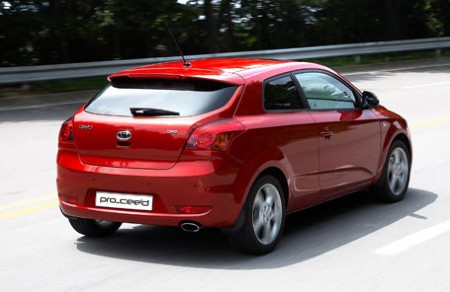 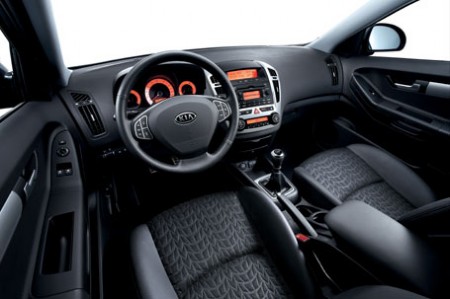 Kia benchmarked the Volkswagen Golf for dynamic testing and it shows.

Though underbody changes are limited to gas-filled dampers and a thicker anti-roll bar at the rear, all-independent suspension provides a sporty feel and neat, composed handling.

While the ride is firm, it’s not at the expense of comfort over main routes and low wind noise allows relaxing cruising.

Performance is as spirited in the Sport as it is adequate in the 1.6 petrol version – when it arrives, the 1.4 promises to be a sluggard – but the high-output 1.6 CRDi is undoubtedly the pick of the bunch.

With a more lusty output than you’d expect from 113bhp, Kia’s latest-technology diesel is quiet, unobtrusive and eager away from the lights.

The stopwatch shows it to be just one second slower to the 62mph mark than its bigger brother – and it has the bonus of a near-10mpg improvement in economy along with greatly reduced emissions.

It might have a silly name, but a profile reminiscent of
the Sport Hatch and Vauxhall Astra plus good quality trim make Kia’s Pro_cee’d an interesting package.