As compact SUVs go, the Sportage has always been one of the best, and best value, on the market, and now it has been given a very gentle makeover, where the main changes are either mechanical or to the specification.

Mechanically, more has been going on.

For the first time, the Sportage now comes with a two-wheel drive option (in petrol manual and diesel auto versions), reflecting some buyers’ need to never go off road.

However, one does have to ask why is there no 2.0 diesel manual to really lower CO2 emissions and improve fuel consumption?

The power steering has been tuned to improve steering response while the suspension has been revised in order to try and make on-road driving more satisfying with less body roll. There are also slightly larger brakes as well.

Production of the Sportage has also been moved during the second half of this year from Korea to Kia’s sparkly new plant in Slovakia. 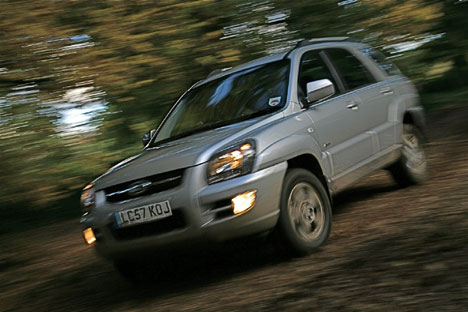 As a result of this move the Sportage can now be offered with a seven-year/100,000-mile bumper-to-bumper warranty, which while not a major issue for all but the highest mileage company car drivers, should at least increase the car’s attractiveness at resale time.

The range has been increased to 10 models, with a diesel automatic version offered for the first time as standard on two-wheel-drive diesel versions.

There are three trim grades – XE, XS and Titan – and prices and specifications have been re-aligned, with two-wheel drive versions starting at less than £14,000, and four-wheel-drive versions at just under £15,000. 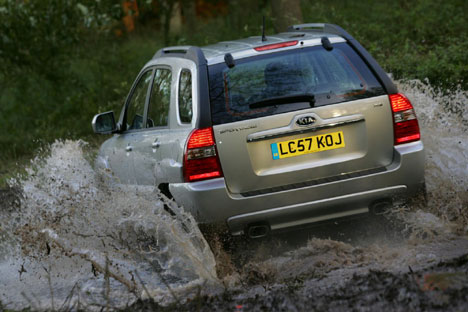 A lot of the interior changes have been made with Europeans in mind: the front seats are now wider and longer to reflect the larger European derrière, while the anti-frost and moisture controls in the air conditioning system have been improved to suit more northern climates.

Engineers have also been working on reducing wind noise in the cabin by making changes to the sealing of the sunroof and the shape of the enlarged exterior door mirrors.

With the addition of two-wheel drive models, Kia reckons it can grow sales from their current level of around 4,500 a year since it was introduced in 2005 to 6,000-plus next year.

In the compact SUV sector, diesels account for 60% of total sales and manual gearboxes 80%.

In a total market of around 80,000 units annually, fleet takes a 30% share and the Sportage pretty much reflects that split.

All models come with six airbags, air conditioning, remote central locking, all around electric windows and mirrors, and alloy wheels.

XS versions have climate control, cruise control, leather upholstery and a metallic-effect centre fascia, which for the 2.0-litre diesel at £17,695 looks good value for money.

The top of the range Titan gets ESP, privacy glass, heated seats, an electric sunroof and larger 17-inch alloy wheels.

The over-riding impression of the Sportage is that you get an awful lot of car for the money. It is spacious inside, drives nicely for what it is, and is well-trimmed and comfortable.

Only the diesel manual was available to test, (looking at the pedestrian acceleration figures for the four-speed auto, it might be just as well) in two and four-wheel drive, and it’s a decently refined engine that pulls well and has more than enough performance.

It is quiet at motorway speeds and nimble enough round town.

The four-wheel drive version tackled a fairly modest off-road course without trouble, although a lower first gear, or more low-down torque, would have been useful.

Having to slip the clutch to keep the engine running, rather than letting it chug along on its own is not an ideal off-roading technique.

So there’s nothing to write home about in its performance, but for a company car driver looking for a lot of space and adaptability, plus a modicum of off-road ability, the Sportage will do the job perfectly well.

Considering it’s the price of a standard five-door family hatchback, the Sportage is very good value, and the changes have made it an even more attractive financial proposition.