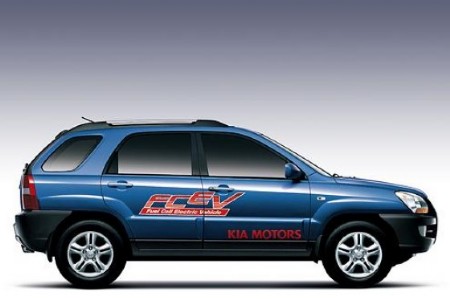 The UK dealer network is to grow from the current 140 outlets to 170 by the same year.

The first hybrid car will be launched in Europe soon after, and bosses have just gone public with their latest fuel cell car.

The gas is stored at 700-bar pressure in tanks on board the vehicle. It’s then piped into a fuel cell stack, which is about the size of a big shoebox, where it combines with oxygen to make electricity.

This is stored in a battery and powers the car via three motors developing 107bhp in total.

All that comes out of the exhaust is water vapour.

Bar the decals down the flanks, the H-FCEV is identical to a standard Sportage SUV.

The most obvious difference is when you shift the automatic gear selector into Drive – there’s virtually no noise as you accelerate.

The one thing you can hear is a whining sound as you speed up.

It’s because the system puts about 1.5 times the amount of hydrogen into the fuel cell as is actually needed, to make sure there’s enough to flood every corner of it.

The noise is the pump, which collects the excess and recycles it.

Aside from that, this prototype drives exactly like every other Sportage.

The FCEV’s performance figures aren’t staggering, but they’re not bad either.

The car will hit 60mph in around 10 seconds – at least as quick as a standard Sportage – and go on to 88mph flat out.

The range between fill-ups is a respectable 240 miles.

It doesn’t sound much, but it’s a major improvement on Kia’s first attempt in 2000 which had a range of just 100 miles.

Kia says the next generation version is already in development but won’t be seen until 2012.

It will have improved dynamics because the fuel cell will be sited low down between the two axles, and will offer more than 130bhp.

The range will be increased to around 375 miles between fill-ups.

Talking of which, topping up with hydrogen is straightforward.

You open the car’s flap as normal, clip on the pump nozzle, press a button on the machine, and it only takes around three minutes.