POOR old Ken Livingstone could have a real hissy fit with Land Rover’s latest vehicle. It’s well known that the Mayor of London is less than impressed with SUVs clogging up his beloved streets in the capital, but while some Land Rovers are city dwellers, there are plenty of all shapes and sizes which are seen in the shires doing what they do best.

There is an authenticity about Land Rover so that when one chugs through St John’s Wood, it doesn’t quite raise the hackles as much. The driver is probably just visiting.

But the Range Rover Sport is a car to compete against all of the sportiest, Tarmac-hugging creations with limited off-road abilities from Mercedes-Benz, BMW, Volkswagen and Porsche.

So has Land Rover sold out? Will Ken’s head explode with indignation at this betrayal of its rugged values in building a car aimed at designer-clad metropolites?

At first glance, putting big, powerful versions of Jaguar engines in a shortened Range Rover with suspension and weight distribution aimed to make it fun on the road seems like pandering to fashion.

But there’s more to the Sport than that. It is a whole new vehicle designed and built to meet very defined criteria, and it sits in the gap between the huge, tank-like Discovery and luxurious Range Rover. 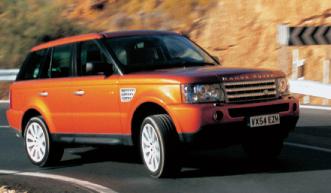 It will come with three engines – a 390bhp 4.2-litre supercharged V8, followed by a 300bhp 4.4-litre normally aspirated V8. There is also a revised version of the 2.7-litre diesel as found in the S-type.

In the Sport however, it only gets one rather than two turbochargers. Apparently the second turbo the S-type has adds high-end power which has little effect in the much heavier Sport, which needs lots of low down torque for its performance. Or lack of it.

At nearly two-and-a-half tonnes even an engine as strong as the 2.7 diesel will have its work cut out, and its 0-62mph time of 12 seconds suggest more sloth than Sport. The looks are a little disappointing, too.

It is not unattractive – anything which borrows heavily on the lines of the Range Rover will never suffer from ugliness, but it pales alongside the wonderful Range Stormer concept shown last year.

The windscreen is more steeply raked than other Land Rovers, the roofline shallows towards the back, while there are deep bumpers and a spoiler on the back, but it still has the impression of being a sawn-off Range Rover rather than a model with its own character.

The interior is a combination of the chunky switchgear of the Discovery alongside the fine quality materials of the Range Rover. For the front passengers, the cabin wraps around them but it still feels spacious and comfortable.

There is also lots of space in the back, despite a 14cm shorter wheelbase than the Range Rover. Four or five people could demolish a continental journey in plenty of comfort.

Land Rover’s motto for the car seems to be ‘breadth of ability’ and, as it’s a Land Rover, the Sport has to cut the mustard off-road. All models have a low-range gearbox, adjustable air suspension, the Terrain Response Control system which adjust the car’s setting according to the conditions, and anti-roll bars which decouple off-road for greater wheel articulation.

Land Rover expects to sell about 10,000 Sports a year in the UK, and is confident that those sales will come, in the majority, from drivers in other brands rather than those downgrading from a Range Rover or moving across from a Discovery.

Whether this is the case remains to be seen, but there are already 4,000 advance orders for the car from the 6,000 available for the rest of this year, with many for the top-end Supercharged version.

Residual values are likely to be strong, with CAP predicting the diesel will be worth 50% of its original value after three years/60,000 miles. The petrol versions will be less robust depreciation-wise, as the high running costs will put off some buyers, but a figure of around 44% is still likely.

IF one is driving to Val d’Isere next winter to ski, it absolutely must be done in a Range Rover Sport. Anything else would be, frankly, so last season.

It’s difficult to explain the muscular, powerful way this car cruises at speed. SUVs allow the driver to sit high above the rest of the traffic, but they also tend to drift a little and totter through bends as well.

The Sport just bullocks along, fast, high, straight and true. It was very windy indeed on our test route yet it just smashed through the weather, impervious to any exterior forces. It is softly sprung enough to flatten out the road, but is firm enough to pound through bends without a murmur, while its massive momentum also keeps it stable on straights.

Need acceleration? Either petrol engine will accelerate the car at an impressive rate, although obviously the Supercharged version will do it in more spectacular fashion, with that same characterful whine as the Jaguar XJR. The brakes, meanwhile, are enormous Brembo four-pot callipers on Supercharged which take a particularly muscular bite out of speed if needed.

Add in very little wind noise – the Sport has a very low aerodynamic figure of 0.37 for an SUV – and big comfy seats and a quality cabin, and it’s the vehicle I’d want for a long drive, although some pretty alarming fuel economy of 15mpg or less would make it an expensive choice.

So this is a long distance leviathan, which generally means a trade off is in other areas of the driving experience. With the Sport, this isn’t so. The steering is on the light side, which makes it OK to scrabble around the city, and means there isn’t a lot of feel if you decide to hustle it along A or B roads.

But it is perfectly accurate, and as the car is really nicely balanced – nigh-on 50/50 weight distribution front and rear – you can tell what is going on through the seat rather than the wheel. It doesn’t have Porsche Cayenne levels of grip but it is still tremendous fun. There is also very little instability when braking, which is normally a trait in SUVs.

But what about the essential element of the car: its off-road ability? It might not get used much but it needs to be authentic, just as an expensive watch needs to be able to work at 2,000 metres down in the ocean. Authenticity is essential in a luxury product and here the Sport does the job.

For hardcore off-road work a Discovery will be better, but the Sport chewed up the rough section I drove easily, adapting to rocks, mud and sand using road tyres. It even showed its phenomenal abilities by climbing a 48° rock face in the hands of an expert. It works off-road. That’s all drivers need to know. They can go back to the shopping now. 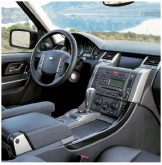 KEN had better get used to it. The Range Rover Sport is so good that it is likely to make soft-roading even more fashionable than it is already.