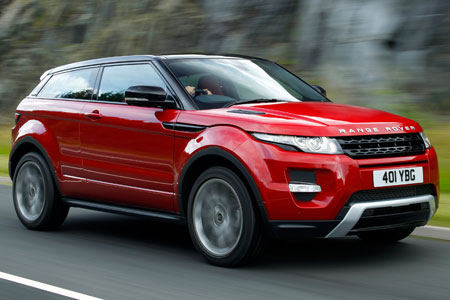 The runaway success story of the Evoque continues with the introduction of a two-wheel drive model which could unlock the door to the competitive corporate market for Land Rover.

A 75kg weight reduction on the Evoque ED4 drops CO2 emissions down from 144g/km on the four-wheel drive version to 133g/km on the five-door and improves fuel efficiency from 49.6mpg to 56.5mpg.

Like the 2WD Freelander ED4 that went on sale last year, Land Rover hopes the Evoque ED4 will make its way on to user-chooser lists with companies that might have 4WD restrictions in place.
Land Rover believes that 472 companies, representing a market of 60,000 fleet vehicles, have 4x4 exclusions in place, so this model will open Range Rover to further sales beyond retail customers.

Sales teams at Land Rover say it’s too early to predict what percentage of sales the ED4 will take in comparison to 4WD, but say all business would be incremental.

There’s a £750 price difference between the five-door 4WD and its 2WD equivalent so customers could potentially save money, get improved fuel economy and benefit from lower taxation.

Any fleets concerned that a 2WD Evoque might struggle off-road should be reassured by our experience. It performs pretty well when faced with challenging terrain. The ED4 powered up some pretty steep inclines and waded through water with ease, helping to maintain that Land Rover DNA even in what is an urban car.

Cosmetically, the 2WD is identical to the 4WD model; the only hint at a change is the rear badging and the lack of Terrain Response system on the touch screen centre console.

The ED4 is still chunky and feels solid on the road. Interior quality on the Pure trim tested is high and the seats are supportive and extremely comfortable.

The 2.2-litre diesel offers the same 150bhp power output but torque is reduced slightly from 300lb/ft to 280lb/ft.

Ride quality was thoroughly tested at Land Rover’s Gaydon proving track and suspension is quite firm when rocking over the type of bumps that crop up all over Britain’s roads.
Handling is tight and the ED4 is smooth, quiet when cruising and still lively enough to be enjoyable when driven quickly.

Land Rover has managed to create a more efficient model which doesn’t detract from what has made the Evoque so popular already.