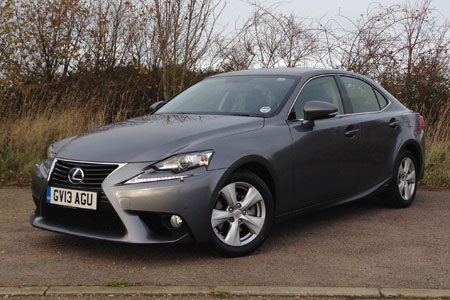 I'm still undecided about the eight-way joystick in the IS 300h, which is used to control the media system.

It can be moved around like a mouse, with a place to rest your hand, and I find it more comfortable than having to reach back to twist a wheel as I had to do in the Mercedes C-Class.

It also seems to be quicker to move through the functions.

But when it comes to typing an address in the sat-nav it’s frustratingly fiddly.

Which brings me on to my second niggle with the IS 300h: the sat-nav itself.

Although standard on the top-of-the-range Premier grade, on our entry-level SE model it’s a £1,995 optional extra.

At that price I had high expectations, but it’s simply not as user-friendly as many other sat-navs.

There are two pages of options for setting your destination, for example. Selecting the ‘address’ option on the first page doesn’t include a postcode as you might expect. Instead, the postcode setting is a separate option, tucked away on the second page of the destination options.

There’s also no obvious mute button. Instead you have to go into the set-up options to turn the sat-nav voice off – something you’ll want to do because when driving round town centres the sat-nav alternates between two different voices.

And it appears to be sensitive to queuing traffic, often warning of queues a few miles ahead that never materialise.

But I’m willing to forgive the IS 300h for its sat-nav foibles because there are so many other things I like about it, such as the comfy seats, the sharpness of the image of its reversing camera image and its refined drive.