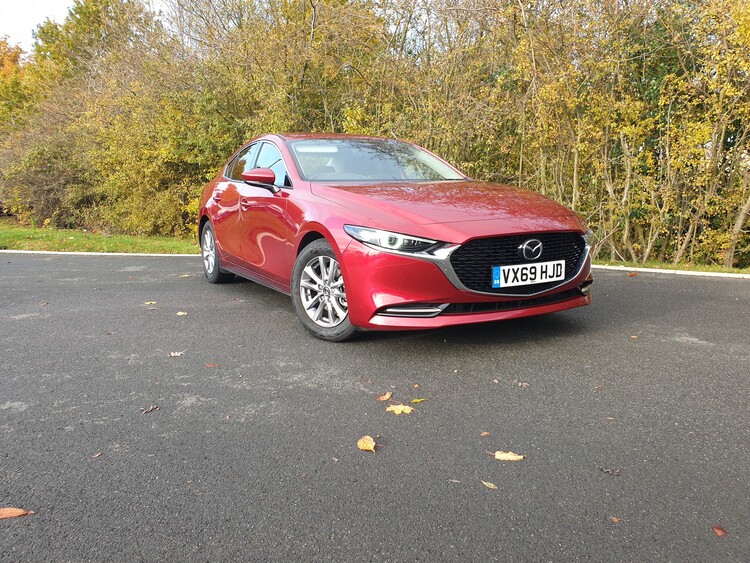 Featuring the highest compression ratio for a production petrol engine in the world, it delivers the acceleration you would expect from a sporty petrol engine, but then gives you the efficiency you would anticipate from diesel at cruising speeds.

The engine – there is only one option for the saloon – is matched to Mazda’s M Hybrid 24V mild-hybrid system that recycles recovered kinetic energy. A belt-driven integrated starter generator (ISG) converts the energy in the 600kJ lithium-ion battery, while the DC-DC converter supplies it to the car’s electrical equipment, further improving efficiency.

We have seen from its time on the Fleet News test fleet that the promised fuel economy of 52.3mpg has not been insurmountable.

And, in terms of that overall driving experience, the Mazda3 saloon also delivers.

On the road, the Skyactiv-X feels like a regular petrol engine, with the free-revving performance you want from unleaded and an impressive amount of torque at low revs. There is a bit of grittiness when worked hard, but not quite the rattle you would associate with a diesel.

The suspension is firm and there is plenty of grip when cornering along with very little roll, making it a really fun car to drive.

The saloon is also exclusively front-wheel drive, while the hatchback is available with either front- or four-wheel drive. Steering doesn’t feel too heavy, however, and it’s precise when turning into corners.

The manual gearbox version (there is an automatic option available) has also impressed with a snappy, precise change, further enhancing its driver appeal.

Lack of touchscreen is welcome

The Mazda3’s infotainment system offers company car drivers an impressive array of features and has been designed with road safety in mind.

In addition, there are two USB ports and steering wheel-mounted audio and Bluetooth controls.

The infotainment system is delivered via an 8.8-inch colour centre screen. 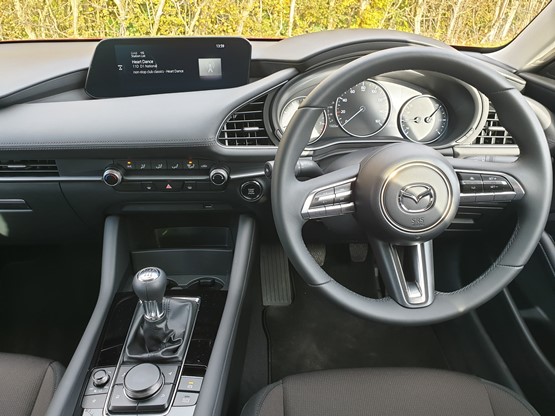 Mazda, however, has deliberately avoided employing a touchscreen, favoured by many of its rivals, in the interests of safety.

The manufacturer examined the time spent looking away from the road to make a screen selection, and the time needed to refocus the eyes on something close versus the road ahead. Recognising the potential impact touchscreens could have on road safety, it chose the Mazda3 to be the first model to carry a completely new system.

Instead of a touchscreen, the functionality is accessed via the Multimedia Commander, a rotary dial between the driver and front passenger, allowing easy control of the infotainment system.

Having experienced many other infotainment systems, Mazda’s decision to deliberately steer clear of touchscreen technology is a welcome move.

Coupled with the increasing functionality of systems, it is also one rivals would do well to follow.

It's a good-looking (yet practical) car

Lockdown for the Mazda3 has given me the opportunity to appreciate the all-new saloon from kerbside and there’s a lot to like.

The Mazda3 saloon shares just its bonnet and windscreen with the hatchback, giving it an executive look distinct from its stablemate.

Sharing an identical wheelbase, the saloon is 200mm longer, while the 444-litre boot (compared with 351 litres) offers a good level of practicality.

Mazda talks about its Kodo design philosophy and how it is inspired by the “purest traditions of Japanese art”, but, in layman’s terms, it’s a good-looking car. 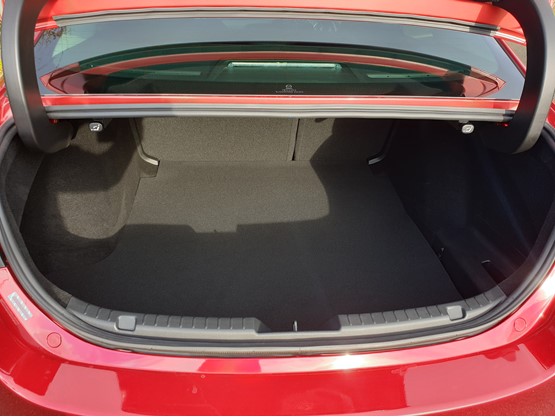 Judges at the World Car Awards appear to agree. The Mazda3 has just won the World Car Design of the Year award, following the lead of the Mazda MX-5, which received the same award in 2016.

Mazda has enjoyed many successes at the World Car Awards, which is an annual contest adjudicated on by an 86-member jury of automotive journalists from 25 countries.

Mazda UK managing director, Jeremy Thomson, said: “In the Mazda3 we simply have one of the best-looking family cars in the world, and this award cements that achievement.”

Mazda’s aim with the new Skyactiv-X engine that powers the Mazda3 is to deliver diesel efficiency, with the performance and refinement of petrol.

Three months into our Mazda3’s long-term test, it’s clear the boffins in the Japanese manufacturer’s engine development team have achieved their aim.

The claimed combined 52.3mpg has not been insurmountable – our test car has delivered similar figures in the same driving conditions, but currently is in the low 40s being driven predominantly in an urban environment. 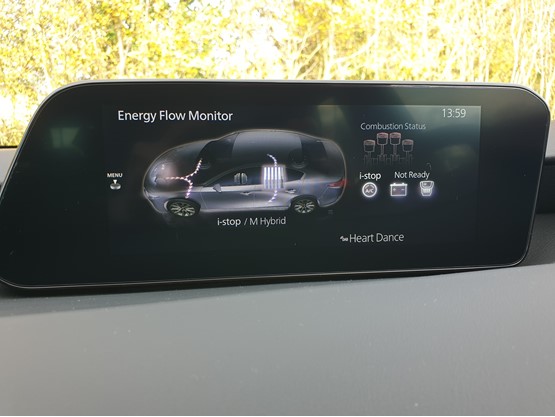 Skyactiv-X has tax advantage over rivals

The Mazda3 faces some stiff competition in the compact saloon segment.

Our 2.0-litre four-cylinder Skyactiv-X Sport test car has impressed with its diesel-style compression ignition and a welcome amount of torque at low revs.

Emissions of 122g/km, which equate to 27% benefit-in-kind (BIK) tax, and an achievable claimed combined fuel economy of 52.3mpg have also added to its fleet appeal.

In fact, on paper, the Mazda3 saloon stacks up well against rivals, which include the Honda Civic and the Mercedes-Benz A-Class saloon

While the tax position of the Civic measures up well to the Mazda3, it appears both employee and employer will have to assess the badge appeal of the Mercedes against the additional cost they would incur.

However, it is worth considering the impact of Mazda’s 2.0-litre petrol engine on fuel reimbursement rates.

Using the Government advisory fuel rates (AFRs), it would currently equate to 14 pence per mile (ppm), compared with 9ppm for a 1.6 diesel.

If a driver covered 20,000 miles a year in the Mazda, that could equate to the employer having to pay an additional £1,000, or 50% more, reimbursing their mileage.

Mazda does not offer a raft of options on the Mazda3, instead preferring to determine what is available via trim level. This would not be too much of a problem if what most would consider as commonplace options nowadays were standard on its cheapest trim, but they are not.

Keyless entry only comes on the Sport Lux and above. The lack of this feature on our car is exacerbated by the fob design, where the buttons are positioned along the edge. They include a button to open the boot, which can easily be triggered by accident, when putting your keys in your pocket. Recent examples have included returning to our test car in a car park to find the boot ajar and discovering it was open when driving. 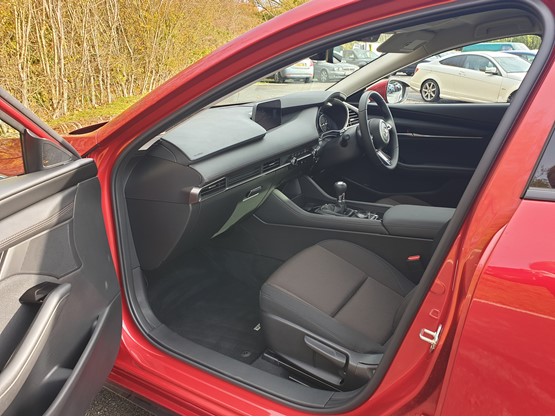 Meanwhile, a reversing camera can be secured through the trim level above the entry model, the SE-L Lux, which also offers auto-dimming door and rear-view mirrors, dual-zone climate control and heated front seats. The SE-L Lux model is £1,100 more than the entry level SE-L trim.

Our test car's Sport trim is no longer offered.The line-up is completed with GT Sport or GT Sport Tech trims, which offer the likes of leather upholstery and driver safety tech.

Power is delivered smoothly enabling you to get up to speed with ease, with a welcome amount of torque at low revs.

The engine is matched to the 24V mild-hybrid system that recycles recovered kinetic energy. A belt-driven integrated starter generator converts the energy in the 600kJ lithium-ion battery, while the DC-DC converter supplies it to the car’s electrical equipment, further improving efficiency. For more on the engine technology.

The Mazda3 saloon range features Sport, Sport Lux, GT Sport and GT Sport Tech trim levels, with a choice of automatic or manual transmission for every grade. Our car is the Sport, which has the lowest CO2 emissions thanks to its smaller wheels.

Mazda MX-30 long-term test | are 'freestyle' doors as practical as they look?