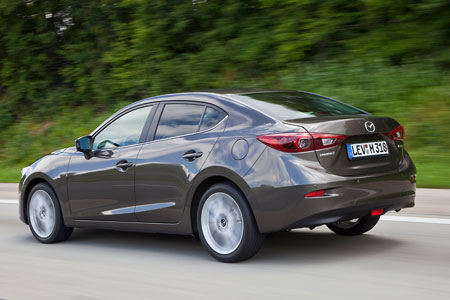 Drivers and their passengers should feel happy each time they travel in the next version of the popular compact Mazda3.

As well as enjoying greater comfort, they will appreciate fresh levels of style and performance in the latest generation of a car that has achieved 3.5 million global sales over the past decade, hopes Mazda.

Longer, wider and lower than its predecessor, the new car has a choice of three 1.5-litre and 2.0-litre petrol engines, plus a 2.2-litre diesel, and will be joined by the Fastback, a saloon version returning to the UK market after an absence of seven years in an attempt to boost fleet business.

Sitting on the longest wheelbase in the C-segment, the Mazda3 has high comfort levels and generous space in an interior that provides extra leg and shoulder room.

With an interior size close to that of the Mazda6, which was  launched earlier this year, the new model is expected to appeal to drivers looking to downsize. 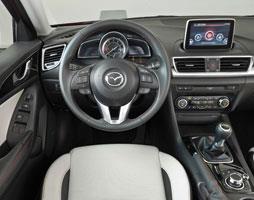 Mazda executives believe the Fastback should win interest in the user-chooser market.

On the road, the twin-turbocharged diesel underlines the larger car feel of the Mazda3 with a seamless flow of power.

The engine also gives the car an easy and relaxed manner with a calm motorway cruising gait.

Piano black and satin chrome trim gives a sporty appearance to the interior, which is dominated by a large, dash-mounted display showing communication and infotainment information selected by a new rotary ‘commander’ knob on the centre console.

Another move reflecting more upmarket ambitions for the car is the availability of a head-up display that puts key information in the driver’s line of vision to aid concentration on the road ahead.

According to Mazda UK sales director Peter Allibon, dimensions and level of detail finishing should allow the Fastback to compete with the BMW 3 Series and Audi A4.

“Pricing is still far from being finalised, but I think we will be able to put our car in the same banding as the 3 Series with a better specification,” he said.

“There seems to be growing interest in smaller saloons and the indications are that our big fleet seller will be the Fastback 2.2-litre SE-L Nav. We hope to have contract hire quotes available as early as October, but deliveries are unlikely to start until 2014.”