MAZDA’S advertising campaign for the new Mazda5 – you know, the one featuring a very life-like female shop mannequin who becomes quite ‘excited’ while being driven around – shows the firm’s determination to imprint the sassy model in our minds and for it not to languish forgotten like its predecessor, the Premacy.

The Mazda5 is a child of the Ford family – sharing its underpinnings with the Mazda3, the new Ford Focus and C-MAX – and is slightly bigger than the Premacy with a much more pronounced mono-box profile. The result is very clean, sharp and contemporary.

But will looks alone be enough? USPs, marketing-types keep telling us, are what sell products…and don’t the manufacturers know it. The Mazda5 isn’t short of a few, but they’re genuinely sensible ones. It offers seating for six people over three rows, with ‘the flexibility of a stowable seventh seat’ between the main chairs of the second row; tug on some straps and it cleverly converts into an arm rest. 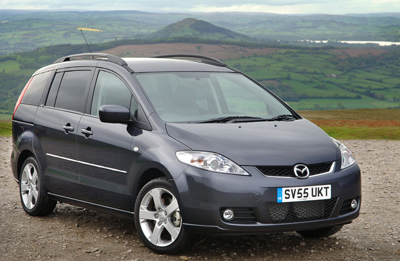 And then there is the Karakuri seat folding arrangement (similar to Vauxhall’s Flex7 system in the Zafira), where all surplus seating folds neatly into the boot floor. Finally the real USP – the rear sliding doors. Anyone with young kids or someone with restricted mobility can vouch for how useful these are.

In Sport trim the specification is comprehensive – satellite navigation and rear parking sensors are the only glaring omissions. The latter is available as a £585 option. The former isn’t and you’ll need to dig a little deeper and go for the Sport Nav model which is £1,650 more than the Sport. But for the extra you not only get satellite navigation with a pop-up colour screen but also a rear parking camera linked to the screen.

Overall, the Mazda’s interior is spacious, seems well assembled and hardwearing and rather classy: brushed aluminium inserts on the armrests and central controls binnacle neatly break up the predominantly dark interior.

There are pockets on all doors, an assortment of lidded cubbies and two under-seat storage bins for the middle row and 10 cupholders!

The next six months will test how real-life capacious, hardwearing and family-friendly the Mazda is.

There are few reminders that you’re behind the wheel of an MPV – the elevated driving position and a steering wheel angled back a degree or two more than in a conventional car, but that’s it really. Importantly, it drives and behaves like a car, albeit one generously glazed.

Early driving impressions have generally been favourable. The steering is light and responsive around town, perfectly weighted with good feedback when pressing on, but a mite too light and fidgety at motorway speeds.

Mechanically, the 2.0-litre 16-valve engine thrives on revs and spins freely to the tachometer’s 6,500rpm red line. But all this top-end free breathing comes at the expense of low engine speed pull – maximum engine torque is at a high 4,500rpm and the Mazda5 needs ample use of the gears when overtaking. 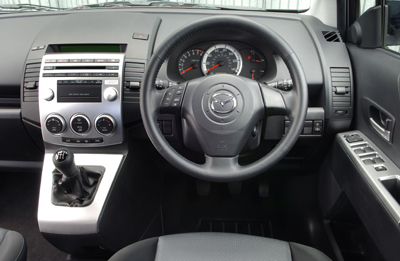 Bizarrely all petrol-engined Mazda5s only get five-speed manual gearboxes – diesels get six – and this highlights the wide gap between fourth and fifth in our car gear.

Reflecting the increased use of the intermediate gears, fuel consumption over this initial test period of 28.3mpg hasn’t matched the official 34.5mpg on the combined cycle. With more miles and a looser engine this should improve. Watch this space.

THE Mazda5 should dispel people’s nagging fears that MPVs are not sexy. With that combination of sassy looks, its dynamic driving qualities and versatile, spacious and classy interior, who could resist not having the Mazda on their ‘I want’ list? And if CAP Monitor’s strong RV predictions for the 5 are anything to go by, fleet managers and user-choosers alike should be on to a safe bet with the Mazda.

‘WE believe the success Mazda has had in other sectors of the fleet market will be repeated with the Mazda5, and more than a quarter of sales will be to fleets. It will come with the same hallmarks as the Mazda6, RX-8 and MX-5, including superb reliability, excellent value for money and very competitive wholelife costs.’
Adam Pumfrey, fleet and remarketing director, Mazda UK