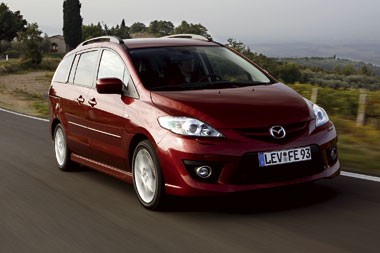 Since it was launched in 2005, the Mazda5 has proved a growing success for its Japanese creators.

The MPV was critically acclaimed and popular from the off and sales have risen since it was introduced.

But with another year beginning, Mazda has decided it’s due a spruce up.

In come new, sharper looks, upgraded equipment and engines tweaked for fuel economy and emissions, as well as some new gearbox technology.

Those who found the rear sliding doors too much like hard work to open can now specify them with an electric motor and a remote control, and higher-spec models feature the Sports Appearance Pack, which adds side skirts, a spoiler and other such paraphernalia.

The paint colour chart has been expanded from five to eight.

Inside, the popular modular seating system – known as karakuri – remains, but the centre console has been given an overhaul and the quality of materials used has been improved.

There are more navigation and audio systems available, including a DVD satellite navigation system that links up to a colour reversing camera.

Under the bonnet, the engine line-up remains broadly similar, with 1.8-litre and 2.0-litre petrol engines and two versions of the 2.0-litre turbodiesel unit.

The petrol-powered 1.8-litre produces 113bhp and has had its CO2 emissions cut from 190 to 182g/km, but its bigger brother has seen the most changes.

The 143bhp 2.0-litre unit has been completely revised, with a new electronic throttle that makes maximum torque available from lower in the rev range.

There are also two new gearboxes available for the larger petrol engine – a six-speed manual and, for the first time, a five-speed automatic.

The diesel engines are available with either 108bhp or 141bhp.

Both have seen emissions fall compared to the outgoing versions, from 173 to 162g/km, dropping them by two benefit-in-kind tax bands.

Also, the changes mean that the 1.8-litre petrol and the diesels fall one VED band compared to their predecessors.

The overhaul has also extended to the chassis, with new dampers and refined geometry claiming to improve the car’s ride and cornering capability. The brakes have also been fettled to provide more feedback.

Although fleets were keen on the old Mazda5, the sales mix has historically been dominated by retail, with 67% of the overall units sold. Mazda expects this to continue with the upgraded version, and hopes to sell between 5,000 and 6,000 of them in total during 2008.

“I expect us to continue to have interest from user-choosers in particular,” said Mazda UK’s aftermarket sales director, Steve Jellis.

There’s no denying that for a big car, the new-look Mazda5 looks rather snazzy, especially when fitted with the Sports Appearance Pack.

The rails for the sliding doors have been seamlessly integrated into the bodywork, and the changes to the face and rear of the car work well. Inside, everything feels good to the touch.

The karakuri system is simple to operate and allows a plethora of seating combinations, although the third row of pews is definitely only for children.

The 1.8-litre petrol engine is a bit of a disappointment, especially with the five-speed gearbox. It’s rather gutless, screams its head off at high revs and could really use a sixth gear for motorway driving.

Both the diesel engines have their own pros and cons. The 108bhp version is very smooth and quiet, but refuses to be hurried. Its more powerful brother hustles along, but sounds more industrial.

However, it’s more than happy to cruise through town with minimal fuss, and takes well to being opened up on the back roads.

In fact, the driving enjoyment of the Mazda5 is impressive – one wouldn’t necessarily think that a child-lugging people carrier could really engage with the road, but this one does it very well.

Handling is assured and the ride is comfortable without being wallowy.

It’s no revolution, more a series of carefully considered refinements that have made an already decent family car even better.

The new Mazda5 is better looking, better to drive and better for the environment, and well worth a look.