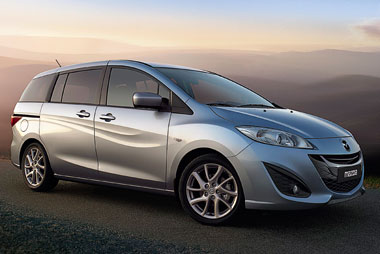 The Mazda5 was always one of the unsung heroes of the compact people carrier sector.

In a market segment where practicality is prized as much as low running costs, the sliding rear passenger doors and the convenience of a fold-away middle seat in the middle row made it a favourite of ours.

If it had any failing, perhaps it was down to the fact that it was available only with 2.0-litre diesel engines and nothing more frugal.

It will be available in 2011 with a 115bhp 1.6-litre diesel, offering a significant reduction in CO2 emissions and fuel consumption compared with the previous diesel which achieved 46.3mpg.

Expect closer to 60mpg with the new version.

For now, though, we were able to try petrol versions: a 115bhp 1.8-litre or a 150bhp 2.0-litre with i-Stop automatic stop-start technology.

While it’s a ‘new’ Mazda5, it is more like a thorough revamp rather than an all-new model.

The Mazda5 is fine to drive, offering good composure on different roads.

The 1.8-litre engine doesn’t feel very ‘zoom-zoom’, and although the 2.0-litre is quicker, the refinement is more obvious than its extra speed.

While the interior has undergone a redesign, Mazda still relies on hard plastics for the dashboard top.

And the all-black interior makes the Mazda5 seem a little old-fashioned compared to cars such as the Peugeot 5008, which use lighter colours to create a less oppressive-feeling cabin.

Low volume should help keep residual values strong, but alongside the likes of the 5008 and the new Ford Grand C-Max, the Mazda5 feels a below-par effort.

We look forward to trying the new diesel, which could sway us in favour of the new model.