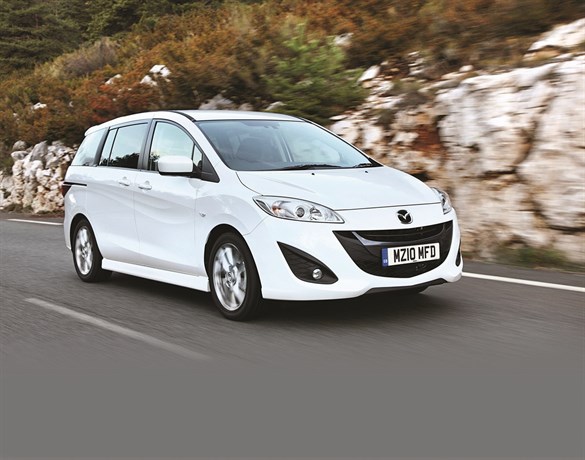 For the last few years Mazda has engineered driver appeal into cars competing in sectors that aren’t usually very exciting.

The Mazda5 is no exception, and while driving enjoyment wouldn’t be at the top of a priorities’ list for this type of car, for those who want to feel more connected when not on people carrying duty, it’s nice to have those options on a choice list.

The Mazda5 took on a new look at the end of 2010 and became available with the latest Ford-PSA 1.6-litre diesel this spring. The latest version of the engine produces 115bhp making it a little more powerful than its predecessor. It also comes with a six-speed gearbox rather than five-speed. Already available in the Mazda3, this has helped bring down fuel consumption and CO2 emissions in cars that used the earlier 1.6. For the Mazda5, the improvements are more significant.

Previously, the diesel Mazda5 was equipped with a 2.0-litre engine, so there are significant gains in fuel consumption and emissions. The best CO2 recorded for the 110bhp version of the previous Mazda5 2.0D was 159g/km which equated to 47.1mpg on the com-bined cycle. The new 1.6-litre achieves 138g/km and 54.3mpg.

And with 115bhp it feels quite lively despite having the ability to carry seven – far quicker than the 13.7 seconds recorded from 0-62mpg suggests.

The 1.6-litre engine is also more refined than the previous version, although this engine is also available in a number of rival seven-seaters: the Peugeot 5008, Ford Grand C-Max and Citroën C4 Grand Picasso.

Although the Mazda5 is described as new – and a great deal of it is new – it is still a development of the earlier version rather than a completely new model.

Unlike the Ford Grand C-Max, which was the first car to use the same architecture as the latest Ford Focus, the Mazda5 is still based around the platform that spawned the 2004 Ford Focus, small Volvos and original Mazda3.

It means the Mazda5 misses out on some of the advanced safety technology options available on the Grand C-Max, but it still has the key features needed in a people carrier. It was the first compact people carrier with sliding rear passenger doors – a hugely practical feature that others have adopted. They are electrically operated as standard on the diesel TS2 model.

It might not be the flashiest people carrier, but the Mazda5 is good to drive, and has all the fundamental elements that make up a good MPV.