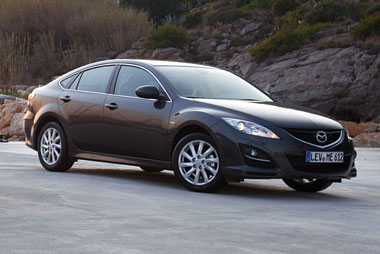 It’s eight years since Mazda’s image in Europe was revitalised by its ‘zoom-zoom’ marketing campaign and the launch of the Mazda6.

The campaign proved to be a big success and subsequent models were received warmly by retail customers and fleets.

The second-generation Mazda6 – launched in 2007 – offered a superior all-round package and, with new diesels launched at the beginning of 2009, desirability improved further.

Barely 15 months later we are welcoming the mid-life facelift model of the Mazda6.

With such a competent product (the range won Best Upper-Medium Car in the 2009 Fleet News Awards, while the Mazda6 estate won Best Estate Car in 2010), it could be a challenge to make genuine improvements, but Mazda has made a few small yet significant ones.

The biggest news for fleets is that CO2 emissions from the excellent 2.2-litre diesel are reduced.

All diesel estates have CO2 emissions below 150g/km.

Of less interest to fleet customers but important as an indication of the direction Mazda is moving is a new direct injection 2.0-litre petrol engine.

Power is increased from 147bhp for the old 2.0-litre model to 155bhp while delivering a modest improvement to fuel economy and CO2 emissions.

This engine is now available in a range-topping Sport grade with a five-speed automatic option.

Equipment upgrades for the range include ‘smart’ turn indicators that can flash three times to signal a lane change when touched lightly and emergency stop signal which allows the brake lights to flash during an emergency stop.

A rear spoiler is standard from TS upwards.

TS2 models come with front and rear parking sensors and Hill Hold Assist, while the range-topping Sport comes with swivelling headlamps for cornering.
Alloy wheels are lighter than on previous versions and interior detailing changes include chrome detailing and ‘piano black’ inserts.

Diesel engines have been improved to cut noise intrusion when cold and seem more refined overall.

The Mazda6 is still one of the most engaging cars to drive in the upper-medium class, with responsive on-road behaviour combined with good ride comfort.

Interior upgrades make it feel more upmarket, and the Mazda6 remains one of the most spacious and practical cars in its class.

Mazda fleet and remarketing director Peter Allibon said: “The Mazda6 was the model that put our brand on the fleet map.

“Now with a range of revised engines delivering significant CO2 emissions reductions, we are confident demand among core company car drivers for the upgraded model will rise.”

Jeff Knight, forecast manager at CAP, said: “The Mazda6 has achieved first-class residual values throughout its history and that is unlikely to change with the latest version.

“Experts at CAP think residual values for the upgraded Mazda6 will improve, particularly on the TS2 grade, where the styling revisions are at their most effective.”

To book a test drive with the latest Mazda 6 model, reserve your place at the Greener Company Car In Action today, for more information visit

Mazda MX-30 long-term test | are 'freestyle' doors as practical as they look?