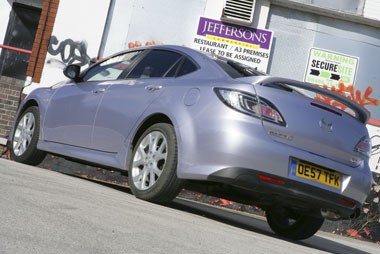 It’s normally at about this time, a few months into the ownership of a new car, that I start finding the things I don’t like about it.

After the initial rush of picking up a new machine and revelling in its freshness, the novelty wears off and little niggles begin to emerge, stimulating enough of my wrath to easily fill a page with ranting.

Which is why it has been extremely annoying to find that the Mazda6 I took custody of at the beginning of the year has so far been completely dependable.

I mean, how dare Mazda put together a car that has developed no discernable major faults and draws admiring glances most times I take it out?

Are they trying to put me out of a job?

Well, they won’t get away that easily.

Ok, so the visual impact of the car and its sports appearance pack hasn’t worn off yet.

It still looks sleek and mean, and barely a few days go by without someone asking me about the car when I’m at the supermarket or filling up with diesel.

And, admittedly, the engine has bedded in nicely and continues to impress with its smoothness and refinement once up to temperature.

Yes, it’s very comfortable for hours on end, with seats that are supportive when the going gets twisty and fitted in just the right way for an ideal driving position.

As a Fleet News employee, it is my duty to uncover faults and deride what needs to be derided.

Little things like an increasingly satisfying gearbox and perfectly spaced aluminium pedals won’t throw me off, and neither will the excellent Bose stereo and auxiliary input socket that allows me to listen to my iPod.

Sure, the handling is excellent, the boot spacious and the back seats easily accommodating for three adults.

But that won’t stop me savaging it like the cynical hack I am.

To start with, there’s the achieved fuel economy, which at 38.8mpg is some way short of the claimed 50.4mpg.

And that has absolutely nothing to do with some enthusiastic ‘testing’ of the more-than-capable chassis off the main roads.

And the shiny finish of the little cubby hole cover by the handbrake is particularly sensitive to scratches.

And there is no option available for satellite navigation or parking sensors.

While the interior is perfectly acceptable, it’s not up to the quality of materials used by the likes of Volkswagen or Toyota, and the silver plastic dash inlays feel a little on the cheap side.

Ok, I’m running out of savagery now, but I’m sure it’s only a matter of time before something of note crops up.

For now, the 6 is very pleasurable to own and drive, but rest assured, I’m watching it.

You hear that Mazda? I’m on to you and your rather impressive ways.

Don’t think you can saddle me with a thoroughly decent car that I’m really growing to enjoy and get away with it.