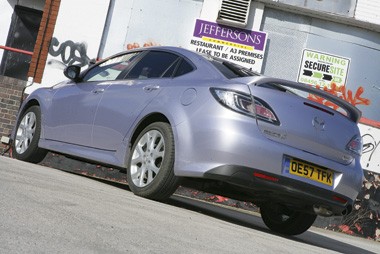 Well, that’s it. I’m off. After three years at Fleet News I’m jetting away to pastures new and hopefully sunnier in the Middle East.

On hearing this bombshell, the office rang to the sounds of my colleagues’ tears and pleas for me to stay.

But once they’d realised it meant the keys to my Mazda6 would be up for grabs, the weeping stopped. Rather too abruptly for my liking.

The 6 has become something of a favourite among the Fleet News team and for good reason.

It’s a sexy-looking car, especially with the spoiler and bodykit included in its sports appearance pack. It’s got plenty of room, front and back, for fully grown adults, and a boot big enough for European road trip supplies, as described in my previous update.

It’s also entertaining to drive. A colleague who had the 6 for a few days said he found it more fun than his Ford Mondeo, which is saying something. And I think I agree.

The steering is direct and has a decent level of feel, and the 2.0-litre diesel engine is strong and economical.

The chassis is excellent through corners but it’s also perfectly at home on the motorway.

Most importantly, it has an auxiliary-in socket so I can plug my iPod in.

It might seem a minor thing but, for those of us that listen to music digitally these days, it’s infuriating that there are still new cars being produced that don’t have such connectivity as standard.

If I had any complaints, they would be aimed at the quality of the interior, which isn’t quite up to the likes of Ford.

And the lack of a spare wheel was quite infuriating when errant metal pierced a tyre at the start of the summer.

The bottle full of rubbery goo supplied is a poor substitute, and required some frenzied fast-fit centre searching in northern France that could have been avoided if a spare rim and tyre had been available to bolt on.

Overall though, the 6 has been excellent.

The only cost has been for a new tyre, although whoever wins the battle for the keys will have to fix a small scrape on the rear bumper. Stupid low bollards.

I shall miss my Mazda, which is the latest in a line of highly impressive products from the Japanese firm that I’ve driven in recent years.

I really hope the company can continue to produce new and exciting cars in a market where it’s all too easy to try and cater for all tastes and dilute the end product to the point of ultimate dullness.

Farewell, and let the battle for the Mazda keys commence.