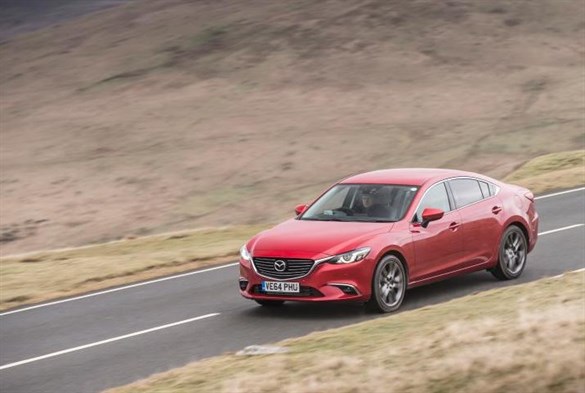 There must have been something in the air over the past couple of months, as a number of car manufacturers have updated their upper medium model line-ups.

The updated Mazda6, then, faces tough competition from the likes of the new Passat and Mondeo. Mazda UK says it has taken note of feedback from its customers on the interior quality of the outgoing model, and has responded accordingly.

Our SE-L model sees no changes to the exterior, with only the top of the range Sport Nav edition seeing minor updates to the grille, lighting design and alloys.

Inside the car, it’s a different story, with major revisions to the dashboard and driver controls. A larger seven-inch touchscreen is the focus of attention, sitting above a clean, uncluttered console. A reduction in the number of buttons is also key to the redesign, as the infotainment system runs on the MZD-Connect platform, first seen on the Mazda3.

While the screen has touch capability, you’re unlikely to use it, thanks to the radial controller and simple buttons sitting next to the new electronic handbrake. It makes scrolling through menus a breeze, and is less of a physical stretch than reaching to tap a screen. The system is clear and easy to use, with text and options easily readable. Navigation makes use of TomTom mapping data.

Digital radio is available for the first time in a Mazda, and is included as standard fit across all trim levels. The instrument display has been decluttered, with clear dials, and the introduction of an LED screen displaying fuel levels, economy and other driving data – although in the bright sunlight experienced on our test route, it did occasionally become hard to read, and the brightness control wasn’t obviously locatable.

Climate control, parking sensors, folding mirrors and rain-sensing wipers are all included, along with Mazda’s City brake support pack. The safety pack, which includes adaptive LED headlights, blind spot monitoring and Lane Keep Assist is an £800 option, but only available on Sport Nav.

That top level Sport Nav sees some additional standard fit benefits, such as the fantastic head-up display first seen in the Mazda3, leather seating and keyless entry, but the ride suffers, due to the 19-inch alloys.

While not as stylish or gadget-packed, the SE-L is likely to remain the pick for business drivers.

The engine line-up remains unchanged, with the manual 2.2-litre 150ps diesel emitting 107g/km, which compares favourably with rivals, and performs well on both rural roads and motorway.

The 2.2-litre capacity does put it in the highest AFR bracket, however, meaning recommended fuel reimbursement is 14p a mile – 3p a mile more than a sub 2.0-litre vehicle. The Mazda6 really is a pleasant place to be.

All told, the updates make it a strong choice against rivals.

Annual service is due, despite covering just 6,000 miles.