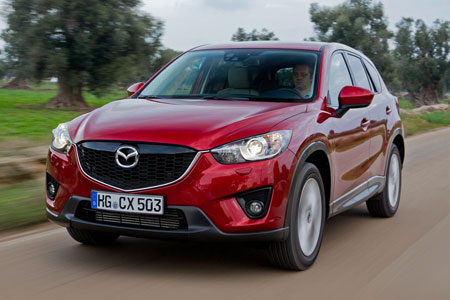 A new dawn for Mazda starts here. The CX-5 is the first model developed under Mazda’s revolutionary Skyactiv strategy.

Although the CX-5 has no direct predecessor, when the strategy is rolled out across other models – expect a Skyactiv Mazda6 in 2013 – there will be an 8% reduction in weight and vastly improved efficiency from engines and gearboxes.

The cars will be lighter thanks to greater use of high-strength steel for key components, which should also result in a re-boot of the ‘zoom-zoom’ driving experience launched with the 2002 Mazda6.

At the root of the philosophy is Mazda trying to ensure that conventional technology – including petrol and diesel engines – is as efficient as possible before it turns its attention to alternative fuels such as hybrids and EVs.

And this is perhaps the most remarkable aspect of the strategy. While many other manufacturers have warned that Euro6 diesel compliancy would bring increased costs that would have to be passed on to customers, Mazda has solved this problem by reducing the compression ratio for the 2.2-litre diesel engine to 14:1 – lower than any other diesel engine – which allows more efficient combustion and lower NOx and particulate emissions.

To enable this Mazda has had to ensure exhaust gases are channelled back to the combustion chamber when the engine is cold to allow it to heat up rapidly. However, the end result works.
Mazda says the CO2 emissions of its 150bhp front-wheel drive manual CX-5 will be 119g/km (with fuel consumption better than 60mpg). Even adding four-wheel drive and a new six-speed automatic transmission to the higher-power 175bhp variant will see CO2 emissions at a modest 139g/km.

Although the cars we drove were prototypes, and some of the materials inside were not the same as production cars, it was evident that the CX-5 is a big step up in terms of the quality of materials for Mazda, with soft-touch materials used more generously than in the manufacturer’s current range.

While final specifications are yet to be finalised, the UK is likely to have TomTom satellite navigation on all versions and use the European mid-grade as the
entry-level car.

Refinement has clearly been given much attention, and the CX-5 felt far more agile on the road than any current rival, including the highly-praised Ford Kuga.

Although fleets will focus on the diesel, the 150bhp 2.0-litre petrol version (capable of 47mpg and 139g/km in front-wheel drive guise) is also worthy of attention for its excellent pulling power at low revs.