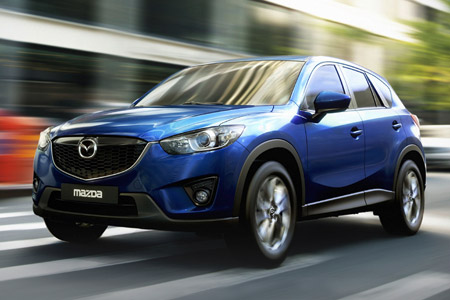 Mazda’s Skyactiv branding could run the risk of simply being seen as marketing speak to enhance its ‘zoom zoom’ appeal, but scratch below the surface and you disc-over it’s showcasing some ground-breaking technology.

Mazda has chosen the all-new CX-5 to showcase this technology with the choice of two new engines with three power outputs: the 2.0-litre Skyactiv-G petrol variant at 165bhp, or the 2.2-litre Skyactiv-D turbo diesel unit – expected to account for 85% of UK sales – at 150bhp or 175bhp.

There’s also an AWD version on the same power output with emissions of 136g/km and a combined fuel economy of 54.3mpg, while the 175bhp offering has emissions of 139g/km and 51.4mpg on the combined cycle.

There are other benefits to Skyactiv, too. The low compression ratio diesel technology also allows Mazda to meet Euro6 emission regulations without expensive NOx (Nitrogen Oxides) after treatment systems.

Automatic transmissions are available in both 2WD and AWD diesel models. But if you’re one of the few who will be buying the 2.0-litre 2WD petrol variant, expect emissions of 139g/km and fuel economy of 47.1mpg.

An optional ‘Safety Pack’ is available on the four AWD Sport and Sport NAV models. The integrated navigation system in the Mazda CX-5 is powered by TomTom technology, featuring advance lane guidance and IQ routes.

Driving the 150bhp and 175bhp diesel models, I was impressed with how nimble the CX-5 felt on the road. Both engines responded with plenty of torque, while the steering seemed quite light.
It also dealt admirably with the single track roads on the west coast of Scotland and, considering there was some harsh braking and accelerating on these winding roads, the 150bhp model still returned 45.6mpg.

Throw in some motorway driving and it shouldn’t be much of a struggle to get close to the quoted figures.

The new efficient six-speed Skyactiv-MT manual transmission was designed and developed from scratch to maximise the full potential of the new powerplants.

It delivered crisp wrist-flick gear changes, like those enjoyed by Mazda MX-5 drivers, and its innovative design has resulted in a significant reduction in the number of moving parts, an overall weight drop of 3kg and a 1% increase in fuel economy. Further weight reduction is achieved through the all-new platform, which provides a highly rigid body and chassis that achieves outstanding crash safety performance and a 100kg lighter than its predecessor.

Every Mazda CX-5 is equipped with ‘Smart City Brake Support’ (SCBS), which helps a driver to avoid a low speed (up to 19mph) frontal collision by activating the brakes and reducing the engine output, if the system detects a frontal collision is likely.

It all adds up to a package which will allow Mazda to compete directly with Ford Kuga and Toyota Rav4, while offering efficiencies that rival higher priced hybrid vehicles.

There are cost of ownership savings for fleet operators and significant financial benefits for company car drivers over rival models.

In addition, depreciation is more than £700 lower than the more expensive equivalent Volkswagen Tiguan meaning the CX-5 is class-leading in depreciation terms.

Mazda is planning to sell 4,000 CX-5s in the first year and, while it conservatively estimates that 20-30% will go to fleets, Skyactiv on an all-new Mazda6 due at the start of next year will be the first real opportunity for the corporate sector to take advantage of this new technology.