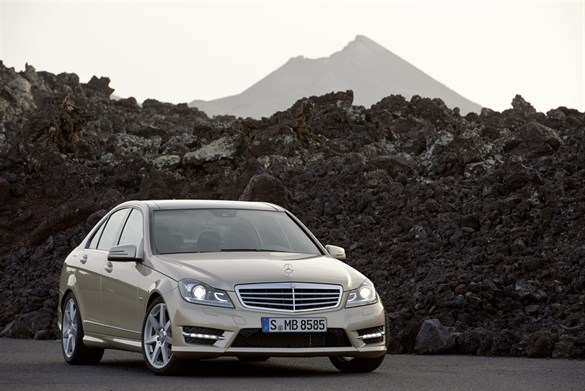 In the not too distant past, when looking at some Mercedes-Benz models for choice lists, they haven’t seemed as competitive as some rivals.

Before the current C-Class model, introduced in 2007, they had appeared a little pricey when compared to equivalent BMW and Audi models, but new UK equipment grades and specification on the C-Class fixed the problem.

The SE, and particularly the SE Executive versions, had all the important kit a driver would expect on a premium badge car. However, many versions of the car fell short of rivals on CO2 emissions, making it more expensive from a personal taxation perspective.

The four-cylinder diesel models were close, but always seemed to miss out on the benefits of having CO2 emissions below 120g/km, while automatic transmission versions – preferred by used car buyers – also carried an emissions and fuel consumption penalty.

But Mercedes-Benz promised changes were on the way, and its goals would be achieved by a combination of measures.

And those targets have been achieved by the latest version of the C-Class, Mercedes-Benz’s rival to the BMW 3 Series and Audi A4 that is available to order now.

Although classed as a facelift, it is the most significant mid-life revision ever carried out on a Mercedes-Benz with about 2,000 new components.

With a sleeker look from its swept back headlamps and reprofiled bumpers, the C-Class also has a new dashboard and new safety kit.

Meanwhile, extensive use of stop-start technology, together with more efficient engines, has resulted in significantly lower CO2 emissions for key models.

So in terms of performance per gramme of CO2 generated, the new C-Class puts up a very strong fight.

Elsewhere in the range there are also significant improvements in efficiency. All four-cylinder diesel versions of the C-Class saloon have CO2 emissions of 140g/km or less, while in many cases the automatic transmission – now a seven-speed 7G-Tronic gearbox – offers lower emissions. Estate versions are within a few grammes of the outputs of saloon variants.

Likewise, most four-cylinder petrol models (saloons and estates) fall within the 160g/km threshold for capital allowances, with the auto transmissions looking even more promising.

The C-Class interior feels more upmarket as a result of the changes – with the display screen out in the open rather than the part-time cover on the earlier versions, while the LCD information display within the instruments is in colour on Elegance and Sport versions.

Sport models have proved popular since they were introduced in 2007 with their more aggressive front end styling, larger alloy wheels and sports suspension.

The four-cylinder engines are familiar, and the 170bhp C220 CDI has strong performance.
However, with 60mpg-plus potential in SE guise, this particular derivative has now become highly competitive in its sector, and is likely to grab the attention of user choosers and fleet operators, particularly with its BIK tax rate of 13% for 2011/12.

The C-Class offers perhaps a smoother drive than other cars in its class with a greater emphasis on refinement, although with a dash of driver appeal thrown in thanks to its rear-wheel drive balance and keen steering.

Changes to the C-Class have given it more than a new lease of life. The whole range now stacks up more favourably on costs than before and this could be key to winning more business and fleet sales at the expense of its traditional German rivals.