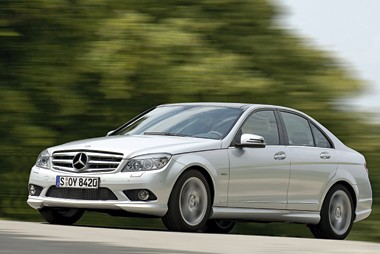 Mercedes-Benz has been at a severe disadvantage to arch-rivals Audi and BMW in the corporate arena for some time.

Last year’s C-Class was a welcome return to top form in terms of no-nonsense styling and interior quality that harks back to the days of those over-engineered, still going strong Merc saloons of the 1980s to mid-1990s. But it has a problem.

In almost all cases, model for model, the C-Class is more expensive to run than the equivalent A4 or 3 Series. This is down to a combination of factors, but mainly the higher front-end price and the fact that its diesel engines are not as efficient.

At the moment hardly any of them, save the 200 CDI, make it under next year’s potentially all-important 160g/km of CO2 threshold.

For company car drivers, the higher front-end price and higher emissions than most Audis make the A4 generally a more attractive car, getting more for less tax.

While the 3 Series is more expensive than the A4, its low emissions and high power across the diesel range also give it an advantage over the C-Class. So in effect, Mercedes-Benz is losing out on all fronts.

This situation, though, is about to change.

On the face of it, the launch of a new engine in the C-Class, the 250 CDI, might be worth a mention in passing and a quick summary of its performance and economy figures.

But this new engine is worth more than that – it heralds the start of a new generation of engines across almost all Mercedes-Benz cars (and vans) that the firm believes will put it right at the very top of the table when it comes to performance and low emissions.

Taking on BMW’s all-conquering EfficientDynamics technology will be the job of Mercedes-Benz’s BlueEfficiency range. And while this is the first car to be badged thus, expect that within a couple of years almost all Mercedes-Benz models will be brandishing this branding, and be returning these sorts of figures relative to each other: 204bhp, 138g/km of CO2 and 54.3mpg.
How good are these figures? Well, BMW’s 123d Coupé offers exactly the same set, and yet that is a much lighter, smaller car. It seems Mercedes-Benz is on to something here.

The key to achieving these sorts of impressive figures is an approach that Mercedes-Benz likes to call ‘intelligent downsizing’ – using smaller engine blocks and applying multiple turbocharging and even more efficient drivetrain technology to produce higher power and torque while lowering emissions: more bang for your buck, effectively.

The starting point for this generation of diesel engines uses a new version of the well-known 2.2-litre four-cylinder unit.

Then, Mercedes-Benz engineers have added a fourth generation common rail injection system that squeaks even less fuel into the cylinders and dual-stage twin turbocharging to produce an engine with this mighty 204bhp alongside a huge 369lb-ft of torque, as well as meeting Euro V emissions standards.

To get the C250 CDI to such impressive levels of parsimony, it also has aerodynamic enhancements including less clumsy wing mirrors, a smooth underbody, reduced rolling resistance tyres, and adaptive power steering that places no demand on the pumps when it is needed less.

The 250 CDI engine will also be in the new E-Class from launch next year, replacing the six-cylinder 280 CDI, as well as in vans, while other cars will get a number of other, yet-to-be announced diesels, both large and small (a version of this engine with 170bhp will replace the current 220 CDI), all produced with similar ‘intelligent downsizing’ thinking.

Soon, almost all diesels in the A, B C and E-Class ranges will be labelled BlueEfficiency.

Mercedes-Benz executives believe the market needs all models to be BlueEfficiency in some form, just as BMW does with EfficientDynamics. This contrasts with the current Audi approach, which is for special eco versions of its cars – perhaps a case of short-term expediency as it has been caught out with the hugely increased demand for lower-emission models.

Apart from some BlueEfficiency badging behind the wheelarch and the different wing mirrors which are more aerodynamic, with little winglets on their underside, there is little to tell there’s anything different about this C-Class.

But underneath a revolution has taken place and what we have here is a warning bell to the rest of the premium sector. Mercedes-Benz is coming, and it’s fully tooled up.

The C250 CDI is a seriously rapid piece of kit. It gets to 62mph from standstill in seven seconds but its real speed becomes apparent in everyday driving.

Long gearing and cement mixer torque means that through the gears the C250 CDI has the accelerative momentum of a global bank run. It just keeps coming, surging to 5,500rpm.

We drove the car on steep, twisting roads around Stuttgart and the ability of this car to pick itself up and hurtle forward is very impressive indeed.

And, all the while, it maintained excellent fuel economy. The fuel needle barely moved in 150 miles of hard driving.

One small criticism would be that it isn’t especially refined, being no more than adequate on that front, but with third and fourth gears seeming able to fling you forward from any speed, and the joys of fuel economy and much lower tax added to the equation of the fortunate company car driver of this machine, the slight refinement issue is a piffling irrelevance.

If this is the future of Mercedes-Benz diesel engines, then the others have to beware.

For too long the expensive option for fleets, if these levels of performance and parsimony are extended throughout the C-Class and E-Class ranges then fleet managers are going to find them extremely hard to ignore.