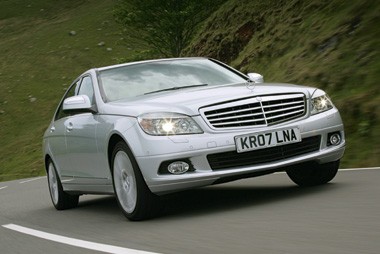 Judging by the number you see on the roads, it’s fair to say that the new C-Class has been a big success for Mercedes-Benz.

The more sleekly-styled model has become a fairly common sight, although it comes nowhere near the ubiquity of the BMW 3 Series.

But most of the C-Classes you see are the more desirable Sport versions with their deep, muscular AMG bodykits and chunky alloy wheels.

All well and good, but with Sport specification carrying a £2,000 price premium over the more basic models, a sporty-looking C-Class is out of the reach of many drivers’ allowances on the first few rungs of the executive ladder.

Which leaves drivers with a choice – entry-level premium
car or loaded-to-the-gunwales offering from a more volume manufacturer? Badge prestige or plenty of toys?

Putting the case for the former is the cheapest C-Class money can buy – the C180K SE.

Power comes from a supercharged petrol engine producing 156bhp and driving through a six-speed manual gearbox.

Compared with the CDI diesels and their low-end thud, and the creamy V6 petrol units, the engine in C180 is nothing special.

But tested in isolation it puts up a strong case for itself, with good low-rev response thanks to the supercharger and decent, if not scintillating, performance.

However, wind it up to the motorway limit and the C180 cruises in a refined manner with little engine or wind noise.

It also rides well, probably thanks to the small 16-inch alloy wheels, but handling prowess hasn’t suffered too much – it corners in a flat-footed and reassuring way.

Inside, the SE-specification cabin loses out to the niceties found in the Sport version.

There are no AMG badges or sporty metal-effect trim to lift the unremitting blackness of the cabin.

However, there is still an impressive list of standard equipment to justify the front-end price – £1,000 more than the equivalent Audi A4 and £500 more than a similar 3 Series.

Mercedes-Benz prides itself on the raft of safety features included, with a whole host or airbags and electronic systems to sort out the mess a driver can get himself in, while there is also Bluetooth telephony, a CD player, air conditioning and electrically-adjustable front seats.

As a first rung on the ladder, the C-Class is a fine place to start – stylish, desirable and offering a decent drive.

It also undercuts the default diesel C200 CDI model by £1,200 at the front-end, although both will cost a 40% taxpayer exactly the same (£162 a month) in benefit-in-kind tax thanks to the diesel’s lower emissions.

So, what’s it to be? Entry-level premium or plenty of kit in a volume offering.

In pure driveway terms, the three-pointed star has a very strong attraction.

The C-Class looks expensive against its two main German prestige rivals, nudging over the £23,000-mark.

However, the Honda trumps them all. Granted, it is not a premium brand but the Accord’s list of kit (part-leather, cruise control, satellite navigation) makes it worth a look.

The BMW’s fuel-saving Efficient-Dynamics technology puts the 320i in a different league.

All four models come with variable servicing intervals, so the main difference here comes down to wheels and tyre costs.

The two cheapest cars, the Mercedes-Benz and the BMW, comes with 16-inch wheels as standard, while Honda and Audi offer an inch larger rims as standard.

EfficientDynamics pushes the BMW’s claimed combined fuel economy to an impressive 46.3mpg, equating to a fuel spend of £6,300 over 60,000 miles.

As the newest model in the German hegemony, the A4 has the best residual value, with CAP estimating it will retain 43% of its cost new after three years and 60,000 miles.

The Mercedes-Benz and Honda will retain 39%, while the BMW has slid down to 35% due to its volumes.

Despite costing the most in depreciation terms, the BMW wins through thanks to class-leading SMR and fuel costs.

The Honda’s much lower front-end price pushes it up the rankings, while the C-class finishes last – nearly 1.5 pence per mile away from the BMW 320i.

The Mercedes-Benz is the first car to be discounted – it is the most expensive in running cost terms and will also cost drivers the most in company car tax.

The Audi and Honda run each other close, and both would make for a very good choice, especially the Accord with its very generous level of standard equipment.

However, and at the risk of sounding like a broken record, the BMW 3 Series is simply in a different class when it comes to fuel economy, CO2 emissions, running costs and driver taxation levels.

The 320i is also the most powerful car here, and undoubtedly a very rewarding car to drive. The 3 Series still rules the roost in this comparison.