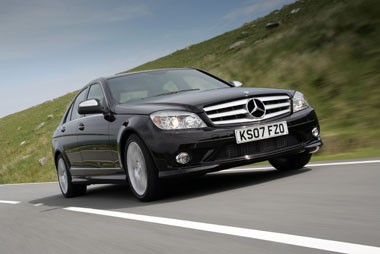 There’s an iPod adapter in our long-term C220 CDI Sport and a three-hour drive to Brighton presented an ideal opportunity to try it out.

The connector lead is in the glovebox and feeds the ‘AUX’ input on the hi-fi.

Once connected and selected the iPod goes into random track playing mode and I quite liked the bizarre juxtaposition of Haydn and Mozart with The Killers and Max Power’s Hot ‘n’ Sticky (the maximum bass sex mix).

But I’ve also got a BBC Learn To Speak French collection on my iPod and halfway down the M11 I found myself conjugating the verb être: “je suis, tu es, il est, elle est…"

The C-Class is a great car for eating up the miles.

The satellite navigation told me it would take three hours from Peterborough to The Grand Hotel in Brighton and it was dead right.

My friend Quentin Willson once told me that part of his definition of a classic car is one that makes you feel better after driving it than you did before you drove it.

By Quentin’s criteria the C-Class Sport is a classic. It looks handsome, it oozes quality and the driving experience is just engaging enough – any more and it would be demanding, any less and it would be dull.

Twenty-seven hours later I had survived the Fleet News Business Forums and was telling a fellow diner that I was planning to drive back to Peterborough that night.

Guests at The Grand have their cars taken away and parked by valet and I actually heard these words come out of my mouth: “Yes, I’m having the Mercedes brought round now, actually.”

The smile on my companion’s face said: “Tosser.”

But the Mercedes-Benz doesn’t always bring out the worst in me.

Since my three-point licence encounter before Christmas, I drive legally all the time.

The cruise control is perfect for fast, clear runs like the one to Brighton and I have seen fuel economy rise considerably as a result.

The night-time drive north from Brighton was blighted by fog, especially around Dartford.

The switch for the front and rear fog lights is part of the main light switch.

You can have just the front lights on or the front and rear one, but not the rear fog light on its own.

And because I’m awkward, this didn’t suit me.

If that’s the level you’ve got to go to find a criticism, there can’t be a lot wrong with this car.