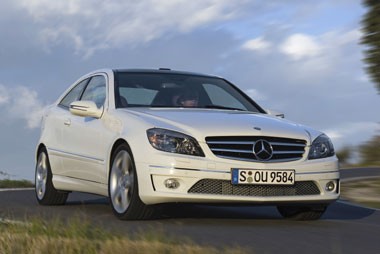 Fresh on the back of the new C-Class, here is the CLC – the new entry-level coupé from the three-pointed star.

However, while the C-Class proper is genuinely all-new, fresh from the chassis upwards, the CLC is less so.

In fact, it’s a tweaked version of the outgoing C-Class Sports Coupé, rather than the new C-Class.

The C-Class Sports Coupé is clearly a car that customers like.

It has sold more than 46,000 units in the UK since 2001, and Mercedes-Benz reckons that a considerable number of buyers graduated up to larger models from the marque.

The CLC is the latest tool to hook young customers into the brand.

While it is little more than an advanced facelift of its predecessor, the tweaks are substantial. Mercedes-Benz says its designers and engineers have changed more than 1,100 parts to create a vehicle that looks well in keeping with its stablemate.

Maybe too well in keeping, in fact – to the untrained eye, the front of the CLC looks just like the C-Class.

The differences are apparent when viewed from the side or back though.

The designers have taken a cheese wire to the back of the C-Class and created a rather slabby rear end to the CLC that, in the opinion of this correspondent, doesn’t really fit in with the design of the rest of the car.

The large rear lights look rather out of date, and the third brake light is too large.

It’s not too offensive on the eye, but it’s hardly going to win any design awards.

The interior will be very familiar to anyone that’s been in a recent Mercedes-Benz.

The cabin is unremarkable in its design, but not unpleasant.

Build quality is fine, and the sports seats are comfortable and supportive.

It definitely feels like a Mercedes-Benz, despite its relatively modest price.

There are also four petrol models, ranging in power from 143bhp in the CLC180 Kompressor – which Mercedes-Benz reckons will be the most popular with fleets – to the 272bhp CLC350, with its 3.5-litre V6.

Prices remain the same as the outgoing car – from £19,920 – while residual values have increased by an average of 3% across the range, which should lower the overall cost of ownership.

Two trim levels are available – SE and Sport. The SE includes half-synthetic leather upholstery and 16-inch alloys and is aimed at older customers.

The Sport model is £1,100 more than the SE and is aimed at younger, more image-conscious executives getting their first Mercedes-Benz.

It includes 18-inch alloys, full synthetic leather seats and trim and a sports steering wheel with paddle-shifters for automatic models.

There is a certain prestige about settling in behind a Mercedes-Benz-badged steering wheel and that feeling is still there in the CLC.

That will be a major draw for potential customers.

Fantastic as many of the products from rival manufacturers like BMW and Audi are, the cachet of the three-pointed star is still seen as the pinnacle by some.

Which is a good thing really, as the CLC isn’t as good as either the three-door A3 or the 1 Series.

There’s nothing really wrong with it, it just fails to inspire or be anything more than adequate in any given area.

The core fleet model is likely to be the CLC220 CDI – a decent, smooth engine with enough go in it to make for comfortable progress on the motorway.

Take the car on to more exciting roads, and it’s not too bad.

The ride is slightly on the firm side, which might put some off, and the handling is on the more comfortable side of scintillating – it’s unlikely to get the adrenalin flowing, but won’t have you screaming in frustration at the lack of involvement.

More excitement is to be had in the CLC350, which packs a 272bhp V6 – a really lovely engine that makes the little coupé fly along.

There’s nothing to seriously fault, but the CLC is a bit of a disappointment compared to its rivals.

The looks are uninspiring and the driving experience is nothing special.

But it is a Mercedes-Benz, and for many young executives that will probably be enough to ensure it’s given serious consideration.