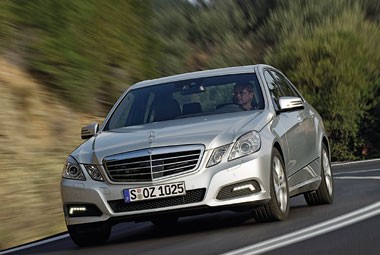 Flush from its success in the corporate market with the C-Class, Mercedes-Benz is adopting a similar approach with its new big brother.

Due to go on sale in June, the new E-Class will have a simplified range, a visually different Sport model and a host of more frugal BlueEfficiency-badged engines.

And it will be much cheaper than the model it replaces, as we exclusively revealed earlier this month (Fleet News, March 12).

Dropping prices by up to £3,000 is good news for company car drivers in terms of lower benefit-in-kind tax bills, plus the price entry point will be reduced to around £26,000 when the E200 CDI SE with a manual gearbox arrives in September.

They will also make savings because CO2 emission levels have dropped by an average of 11% across the range.

But the pricing move is arguably the most important aspect – and this drop doesn’t come at the expense of equipment.

Move up the streamlined range to Avantgarde and the leather becomes cow-made, while Sport models gain a full AMG bodykit and 18-inch wheels.

Importantly, all models come with Attention Assist as standard – a device which monitors driver behaviour and sounds an alert if it believes the driver is in danger of nodding off behind the wheel.

Nick Williams, product group manager at Mercedes-Benz, said: “We have been so focused on the corporate market with this new model.

Fleet accounts for at least 50% of E-Class sales – and with corporate funded purchases this figure is much higher.

“Everything we have done with this car has been with corporate buyers in mind, from specification and pricing to CO2 and SMR costs.

"And with the E200 CDI we can now compete in the heartland of this sector which is where the volume is.”

Williams expects to sell around 12,000 units in a full year, with 87% of registrations being diesels.

He also wants to sell more models with manual gearboxes, such is their price and emissions advantage, by upping their market share from the current lowly 5%.

“This is a real opportunity for us, particularly with fleets. Our manual gearbox is now much improved in terms of action,” he added.

Mercedes-Benz believes SE will be the key trim level for fleets, and these versions will be available only with four-cylinder petrol and diesel engines.

On the road, the E220 CDI with 170bhp is more than adequate for most journeys, although it did feel a little strangled on some of the more hilly parts of our test route.

Jump into the E250 CDI with 204bhp and this problem disappears. This unit has the power and refinement to make it a very good all-round bet.

However, the biggest surprise of the range is the 184bhp E200 CGI petrol allied to a manual gearbox.

Sprightly, if a little noisy at higher revs, this combination really works well in the E-Class and when it arrives in the UK in February it will feature a start/stop system to cut CO2 emissions to 159g/km.

While in outright dynamic terms a BMW 5 Series is a more involving drive, the E-Class still makes a decent job in the handling department.

It is a much softer car than the BMW, and will understeer fairly readily, but this is the trade-off for that supremely comfortable ride.

But the thing that strikes you most about the new E-Class is the level of refinement.

Quite simply, it is the quietest, smoothest riding car in the executive sector and there is no better place to rack up serious mileages in utter comfort.

Wind noise and tyre roar are virtually non-existent, while the engines settle into a subdued accompaniment when you get up to motorway speeds.

The new E-Class is the most comfortable and refined car in its class, and now it is even cheaper to buy than before.

As an all-round package, it is very hard to beat.