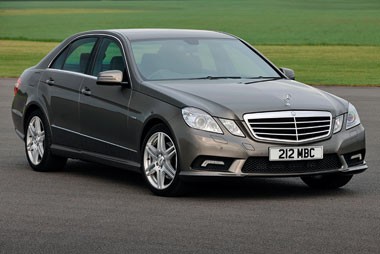 Mercedes-Benz’s approach to the new E-Class saloon has been both conservative and daring in equal measure.

Conservative because the car has restrained styling and a hewn-from-solid feel which used to be its models’ calling card, and daring because of the pricing action taken to ensure the E-Class looks competitive against its key rivals.

The latter approach, which has seen up to £3,000 taken off the price, means that in wholelife cost and driver BIK terms the E-Class can finally compete, unhindered by a premium pricing strategy which stymied its challenge from the outset.

The BlueEfficiency part of the name is important as it means this E-Class (and every other variant, excluding the E500 and AMG models), has a suite of fuel-saving technology included as standard.

This includes improved aerodynamics, low rolling resistance tyres and reworked engine internals such as the alternator and air conditioning units which have been designed for optimum performance.

These figures are for the standard manual gearbox model – adding automatic (as most drivers are expected to do) sees these figures fall to 48.7mpg and 154g/km.

Our test model features the automatic gearbox and despite the extra cost it is the one to go for.

Cars of this type and size are generally powered by an automatic gearbox, and the five-speed auto unit suits the relaxed gait of the E-Class.

It is certainly the most comfortable car in the executive market (Jaguar XF aside which is only sold with higher-end diesel engines and can not compete on price), and real-world economy in the low-40s is good for a car of this size.

To make the car even more appealing, Mercedes-Benz is currently offering special deals through its in-house contract hire arm.

The E220 CDI SE with metallic paint and automatic gearbox is currently available for £385 a month on a three-year/30,000-mile contract hire deal.

That’s a lot of car for relatively little money.