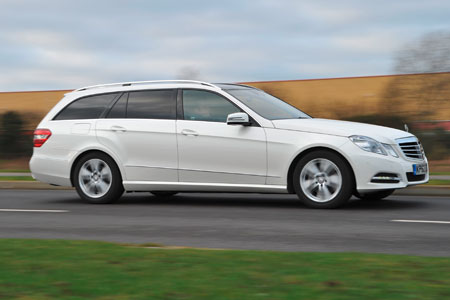 Mercedes-Benz stepped into the territory previously exclusively held by PSA Peugeot Citroën with the launch of the E300 BlueTec Hybrid diesel last year.

It has a short-lived life in this body shell: an all-new E-class will be launched in March, although the existing hybrid technology will be transferred to the new model. That means no change in the CO2 emissions/fuel efficiency figures, but it will be housed in a new-look car.

The headline figures make impressive reading: the combined figure for the estate car on test here (which sits on the no-cost optional 16-inch alloys rather than the standard-spec 17-inch) is 64.2mpg while CO2 emissions are  116g/km.

However, like the experiences we’ve had in the PSA diesel hybrids, the real-life figures fall some way short. We averaged 42.2mpg during two weeks in the E300, although this peaked at a little under 48mpg on longer, motorway-dominated journeys.

The improvement is down to a special coasting mode which shuts down the engine during main road travel on a flat gradient or decline, allowing the electric motor to maintain speed to minimise fuel consumption. Called Sail, this clever extension of engine stop-start gadgetry is a unique function included as standard.

The motorway figures are a clear indication that it works.

However, the system is not faultless: it can take a couple of seconds to reawaken if you suddenly need to accelerate and also sends shudders through the cabin whenever it fires back into life.

With prices starting from a little over £41,000, the E300 hybrid estate has competitive running costs on paper, although some diesel rivals will return better real-life fuel efficiency figures. However, the low CO2 emissions mean that fleets leasing this car will still be able to fully deduct the full cost of the lease against taxable corporate profits after April when the threshold level reduces from 160g/km to 130g/km.

Diesel-powered rivals from BMW and Audi sit above the threshold and so are hit with the 15% restriction, meaning companies can only deduct 85% of any rental payments against taxable profits.
The figures add up, but what about the driver experience?

The E300 estate offers decent handling and a comfortable ride – perfect for a load-lugging car – with abundant power from the 228bhp electric/diesel combined output and 369lb-ft torque from diesel alone.

Given the model-on-model improvements Mercedes has made with recent launches, it is fair to assume that the all-new E-class due in March will further enhance ride and handling.

More importantly, this car has a gargantuan boot – 695 litres with rear seats up; 1,950 with them down – sufficient to swallow a mind-boggling amount of gear (see photo, left). It also has a hidden space under the boot floor for even more stuff.

Premium petrol hybrids have gained a reputation for being expensive cars best suited to those with environmental egos to swell. The Mercedes-Benz E300 diesel hybrid ticks all the same green boxes but also makes a strong business case.