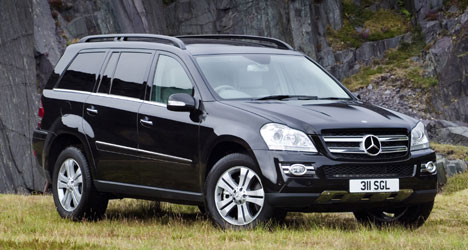 You might not like Boris Johnson and his floppy blond lid – or his stammery public school persona and right wing attitude to life and Liverpudlians – but you cannot deny that he has the strength of character not to modify what he says or how he behaves.

And I’d wager you will need to be a Boris-esque character to be truly at peace driving around in a Mercedes-Benz GL, because this thing is a two-fingered salute at those who might decry SUVs. It is Big and Brash with two capital Bs.

Actually, sport utility vehicle doesn’t exactly describe the GL, because sporty it is not. Nothing this big can be sporty, except for the odd Tongan rugby star. It is truly huge, at more than five metres long and weighing in at nearly two and a half tones.

I’m over six foot tall and it’s not often a car is taller than me. But the GL is. In fact, I took it to France on the Eurostar train and it couldn’t go in the regular car carriages – it had to go in an oversize cabin with the caravans and lorries.

Not surprisingly, this vast chunk of metal doesn’t come cheap and at nearly £64,000 there are few SUVs that are more expensive.

So what do you get for the money? Up front, there is a 4.2-litre V8 diesel engine that produces 306bhp and a gargantuan 516lb-ft of torque, which means it actually has some decent performance.

Amazingly, it will go from 0-62mph in a little over seven seconds, which is no mean feat considering the weight it has to get moving.

And once you’ve got some momentum, it will happily blast along at whatever speed you fancy, all done in a quiet and relaxed fashion. In fact, such is the size and plushness of the cabin, you’d be forgiven for thinking you were ever moving at all.

Of course, there’s a penalty for this and that’s fuel consumption.

The combined figure is 23.9mpg, although we found this surprisingly easy to hit on a long trip involving lots of autoroutes. And the car was packed to the rafters too, with five chaps and all their kit.

In terms of interior space, there’s not as much as you might think, despite three rows of seats, in which the third row fold electrically into the boot floor. This last row takes up a lot of usable boot space, making it not much better than many five-seaters.

Up at the front, where you feel a little like the captain of an airliner, the cabin is almost exactly as you would find in its smaller ML brother, which means quality materials, lovely soft leather seats and a plethora of buttons – so much so that I was discovering new buttons at the end of a week’s loan.

Piloting the GL is an interesting experience in which your two best friends are the parking sensors front and rear, acting like little electronic tug boats directing you through the tightest of channels.

The 12-metre turning circle of the car means that you spend an awful lot of time reeling the steering wheel back and forth, but at least it is very well assisted and I suppose if you did hit something, at least you’d win.

But in the end you have to ask yourself: does anybody on Britain’s clogged roads need a car of this size?

It’s certainly a very impressive feat of engineering and the engine is wonderful. The fit and finish, too, is top class.

However, for the vast majority of people with this much money to spend, you’d have to have a very specific lifestyle to tick all the GL’s boxes.