THE Mercedes-Benz M-class is as Home Counties as Waitrose, naming your kids Timothy and Henrietta and holidaying in Provence.

Which probably explains why the new M-class I was driving on the country lanes surrounding Henley the other week drew so many admiring glances.

This car exemplifies its breed – great badge, good looks and huge road presence. The fact that it can also cut the mustard off-road is secondary – these cars are first and foremost an image statement.

So it’s not surprising that sight of a new model on leafy Oxfordshire lanes will have aroused a degree of interest.

They will notice that the front-end is much sharper than before, giving the new car more road presence.

They will also like the new-look interior, with its E-class-style centre console and much-improved build quality, although the plastics used on the door panels look cheap and feel out of place with the rest of the interior.

What they are less likely to appreciate are the wholesale revisions which have taken place under the skin. Most importantly, there’s a new monocoque chassis which makes this model much better to drive on the road.

There are also two new V6 engines in the ML320 CDI diesel and the ML350 petrol. Joining them is the V8 ML500 for those who love visiting petrol stations. All are mated to the 7G-tronic seven-speed auto gearbox. 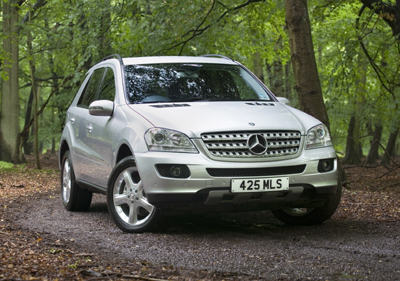 For most buyers, improved off-road ability will be pretty much bottom of the list, but this new car is much better in the countryside than before thanks to new features such as Downhill Speed Regulation to stop the car speeding away, Start-off Assist to stop it sliding backwards and the optional Off-road Pro – a pack incorporating a two-speed low-ratio gearbox and modified Airmatic suspension to increase ride height.

Mercedes-Benz expects to sell 4,000 MLs in the UK in 2006 – which is on a par with a good year of sales for the old model – and corporate sales will account for 30% of those.

The range will expand in April when the ML280 CDI arrives, using a smaller version of the V6 diesel, and next summer the awesome 500bhp ML63 AMG will be unleashed on our roads.

DESPITE having much improved off-road ability, this hasn’t been achieved at the expense of on-road comfort.

It certainly coped with the off-road course provided on the launch, and an extended drive on roads around Oxfordshire showed that the new model is much improved over its predecessor.

Body roll is well suppressed for a car of this type, and the Airmatic suspension does a good job of softening out uneven roads. However, you need to keep it in Comfort mode as switching to Sport makes the ride far too jarring.

My first drive was in the V6 diesel model, and it comfirmed that diesel is the only choice in a car of this type. With 376lb-ft of torque from just 1,600rpm, the ML320 CDI has more than enough power to lug the ML’s weight around. Mid-range acceleration is particularly impressive, giving this car the surge of a much smaller and lighter vehicle. The 7G-tronic gearbox shifts imperceptibly and engine noise is well suppressed, meaning the ML is refined at motorway speeds.

A brief follow-up drive in the ML350 showed that while it is a good engine, it is overshadowed by the diesel. The 350 sounds good and accelerates well, but it makes such a fuss of building speed compared to the relaxed gait of the ML320 CDI.

THE new M-class not only looks sharper than before, it also drives much better, too. The 320 CDI is easily the pick of the range, blending impressive mid-range power with fairly realistic fuel economy figures.