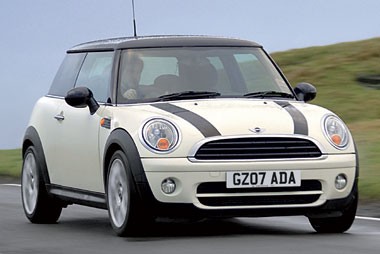 I’m going to make a sweeping and in no way scientific observation – a lot of pretty women drive MINIs.

And a lot of them started waving at me last week.

However, I suspect the latter was more to do with me driving a Cooper diesel, and rather less to do with my attractiveness to the opposite sex.

You see, MINI drivers can not pass another MINI without waving – they’re a happy little club and that wave implies that you are another person of good taste when it comes to choosing your car.

The fact that there are myriad personalisation options and retro styling have won the MINI a place in our hearts.

But the appeal is also in the head, too.

A few figures for your consideration – 104g/km of CO2, 72.4mpg claimed fuel economy, £35 annual road tax and a residual value prediction of 46%.

These numbers make the MINI a tempting prospect for drivers and fleet managers alike.

Yes, the Cooper D might be expensive at the front-end, but it more than repays this investment over three years and 60,000 miles.

We’re now on MINI mark II, which means a bigger car all round, although the rear seats and boot space are still limited.

But this didn’t hinder sales of the smaller mark I MINI, so there’s no reason to suggest it will do anything but in this incarnation.

That cute styling is still there, as is the equally retro interior with its large dials and toggle switches which hark back to the original Mini.

And the handling is still as good as it ever was, with a flat stance in cornering and zippy appeal for urban work.

On the open road the 1.6-litre diesel engine really comes into its own, with plenty of mid-range power on tap from as little as 2,000rpm.

With 110bhp, the Cooper is not the most powerful diesel small car available, but the driving experience more than makes up for it.

You sit low down in the car and really feel part of the action.

The steering is very accurate, with the front end of the car going exactly where you point it, and the ride quality is much improved over the old version thanks to a longer wheelbase.

With a short-throw gearbox action and great visibility all round the Cooper is a sprightly little car – although I use the term ‘little’ loosely as the MINI is a big car for the class despite its limited internal dimensions.

The MINI range, including the convertible and Clubman, was named best small car at this year’s Fleet News Awards, with one judge commenting: “There is no other car in the sector that drivers would like to have more.”

Praise indeed, and praise which is well earned.

We’ve added the Pepper pack to the MINI which adds essentials such as air conditioning, upping the base £14,420 price by £1,000.

This makes it by far the most expensive car on test.

The Peugeot is in the same band but its lower front-end price means a monthly bill of £28. The Corsa costs £36 and the Polo £41.

The Vauxhall is the cheapest in service, maintenance and repair terms, undercutting the Polo by £200 over three years/60,000 miles.

The Corsa’s 20,000-mile service intervals help, although it has
16-inch wheels compared to the 15-inch items on the MINI and Polo which lower tyre costs.

An easy victory for the MINI, which is claimed to return an average of 72.4mpg – a quite staggering figure.

As a result it will cost around £900 less in diesel over 60,000 miles than the Peugeot in second place.

The MINI is a coveted brand and used buyers are prepared to pay higher prices, which is why CAP estimates the Cooper D will retain 46% of its cost new after three years/60,000 miles.

No surprise that the MINI wins thanks to its huge advantage in fuel and depreciation costs.

Despite its higher front-end price it undercuts its much cheaper rivals over a typical fleet lifecycle.

The Peugeot will cost around £2,000 more to run over the same period.

A very convincing victory for the MINI.

It is a car which drivers desire and which makes great financial sense for a fleet manager.

The other cars in this test may be larger and offer more flexible interior accommodation, but none of them can match the brand appeal, charm, driving fun and image that the MINI offers.

With a larger cabin it is now a little more usable, although space isn’t great, but for young employees who want the right car for their image nothing can touch the Cooper D.

And its fuel economy and emissions performance is quite simply staggering.