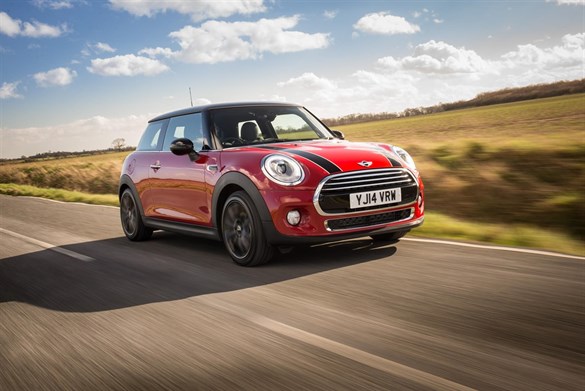 It took until the third incarnation of BMW’s Mini that the company felt confident enough to abandon the over-sized speedometer that had become a focal point of the dashboard.

Now Mini feels it has the freedom to make any changes it wants as long as the car retains the hyped ‘go-kart feel’ of the original car, as well as its premium car quality (endowed only in the BMW years).

The new Mini is just that. Nothing has been retained from its predecessor and while petrol variants don’t quite duck under 100g/km, the diesel variants available certainly do.

We drove the new 1.5-litre three-cylinder diesel Cooper D with 116hp (4hp up on the previous 1.6-litre Cooper D). It has CO2 emissions of 92g/km (auto: 98g/km), putting it one benefit-in-kind tax band lower than its predecessor. However, the Mini One D, coming a little later and using a less powerful version of the same engine, has emissions of 89g/km, putting it among the best diesel cars on sale for CO2.

The Mini is responsive and refined. It has also retained its point-and-go feel, while ride comfort is improved over previous generations.

BMW’s Minis have often been criticised for not being small, and the latest generation model has grown again, with an extra 28mm in the wheelbase and a wider track.

At 3,821mm long (Cooper S: 3,850mm) it’s still shorter than a Renault Clio, Vauxhall Corsa, Ford Fiesta, Volkswagen Polo and the Audi A1. The longer wheelbase helps liberate some extra legroom in the rear and travelling in the back no longer seems quite the hardship it was in its predecessors.

The boot is also much larger than before. At 211 litres it’s still smaller than average for the sector (Fiesta has 276 litres), but it no longer feels a compromise as an everyday car.

Since the second incarnation of the BMW Mini in 2007, Audi has launched the A1, setting new benchmarks for interior quality. Mini has responded and materials feel more upmarket and there is an improved finish.

Moving the speedometer to a pod mounted on the steering column means it’s closer to the driver’s eye-line. In the space taken by the speedometer in previous versions is a new multi-function display.

Mini Connected or Mini Connected XL is also available in conjunction with the Mini Visual Boost Radio and the MiniNavigation System. It offers integration of smartphones, enabling the use of internet-based services in the areas of infotainment, communication and driver experience.

Mini has yet to confirm the first five-door version of the hatchback, but spy photographs have circulated. The new three-door hatchback will have greater appeal for fleets and drivers than its predecessor, but many more will be awaiting the arrival of the five-door version with interest.