LIFE is full of ironies. For example, just when you are earning enough money to treat yourself to a sports car, you start having children and end up in a people carrier instead.

So near, yet so far. But at least the Grandis stands out as the least MPV-like MPV on the market, especially in its Warrior trim.

With black paintwork accentuating its aggressive front grille, and sporting 18-inch alloy wheels, chrome door mirrors and handles, it makes the most of the svelte looks of the Grandis, which is more like a long car than a traditional MPV, despite the third row of seats in the back.

As those seats will most likely be carrying children, there is more safety equipment than you can shake a stick at, with curtain airbags up to the second row of seats, anti-lock brakes with electronic brakeforce distribution and electric rear windows with anti-trap mechanism to stop little fingers getting caught. 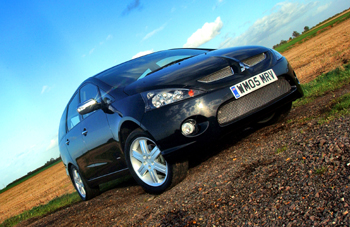 All this is topped off with a heavy swathe of leather on all the seats, including the easy-folding third row.

Expected fuel economy is 42.8mpg and CO2 emissions mean a benefit-in-kind tax bill based on 22% of the car’s P11d price, rising to 25% if it is delivered after December 31, when the 3% company car tax discount for Euro IV diesels is scrapped.

This compares well to the 2.4-litre petrol automatic, which achieves 28mpg and throws out 237g/km of CO2 in standard automatic set-up, putting it in the 33% tax band.

So it is little wonder that 85% of the expected 4,000 Grandis sales in the UK next year will be diesels, with 50% of total sales being of Warrior-spec versions.

With only a few miles under its belt at Fleet News, first impressions are good, particularly with its efforts at looking as little like an MPV as possible.

The folding third-row ‘hide and seat’ chairs are yet to be put into use, but I have tried out their hidden benefit – they flip over to create rear-facing picnic seats when the rear hatch is open. But there are some items which we would like to see as standard. Traction control would be a bonus as the front wheels are eager to spin when pulling away from a corner, especially in the wet. I would also like to see reach-adjustable steering to add to the height adjustment, and steering wheel-mounted stereo controls.

We’ve covered about 1,000 miles in the Grandis so far, and we’ve already had to visit our local dealer. The driver’s side armrest had fallen off, but a quick visit to Crightons of Peterborough had it fixed in five minutes for free – now there’s service.

And with high mileages expected for this car, we will be back quite soon, as the diesel-engined Grandis has 9,000-mile service intervals.Mitsubishi points out that although this is less than for the same engine in a Volks-wagen (up to 20,000 miles), the firm is only protecting its generous three year/unlimited mileage warranty cover by keeping tabs on the car.

NOW there is a diesel engine under the Grandis’ sleek bonnet the model makes a lot more sense to fleet buyers. And as it’s a Volkswagen unit it promises to be refined and economical. Our car is in top-spec Warrior trim with DVD entertainment system with a screen which drops down from the roof, so we’re expecting many miles of peaceful motoring as the kids will hopefully be kept occupied in the back.

‘The Grandis DI-D will form a significant part of our fleet strategy. We have forecasted around 1,000 fleet sales in 2006, but this is a conservative figure. Many of our fleet customers have been waiting for the diesel unit. We see potential growth within the police authorities we deal with and with some of our specialist customers such as BAA.’ Andy Wertheim, fleet and used car manager, Mitsubishi 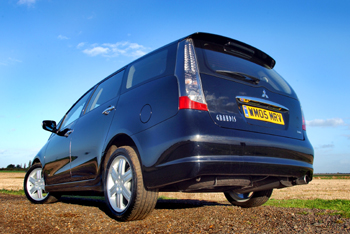