OUR Grandis has been well and truly put through its paces in its five-month stay with Fleet NewsNet.

Three members of the team, with differing styles of driving and life, put more than 12,000 miles on the clock, taking the MPV the length and breadth of the UK in a variety of weather conditions.

Our test model was the new addition to the range, with a 2.0-litre turbodiesel engine. When it arrived here back in November, Mitsubishi said it believed its plan to sell 1,000 units to fleets was a conservative figure.

This powerplant gives the Grandis a wicked turn of speed and ample mid-range power, belying the car’s size and giving a smooth ride even when laden with seven adults.

Mind you, despite the engine being of the pumpe duse variety as built by Volkswagen, it still sounds like an old-style ‘rattler’.

You’ll think you’ve fired up an ancient Ford Transit the first time you get in it.

One tester, John Maslen, underestimated its power to the point of wheel-spinning on several occasions when pulling away.

There are a couple of other reasons for choosing this model over the equivalent 2.4-litre petrol version. The diesel attracts a lower benefit-in-kind tax bill (£2,350 compared to £3,168) and offers higher fuel economy (43mpg versus 28.2mpg).

Having said that, the average economy for its period with Fleet News totalled 36.8mpg, although Maslen achieved a creditable figure of 45mpg at one time.

Other gold stars were awarded for the Grandis’s load-carrying abilities – both humans and their belongings – and for the generous amount of safety equipment, particularly important for drivers with children.

The safety specification includes ABS brakes, driver and passenger airbags, side airbags, Isofix child seat anchors and a trio of three-point rear seat belts as standard. Fortunately considering the Grandis’ size a reversing sensor, while not fitted on our test vehicle, is available as an option?: they are priced £144.26 plus VAT and two hours labour time.

On the minus side, traction control is not available.

The folding third-row ‘hide and seat’ chairs are a doddle to use. Pulling them out of the floor and into position complete with detachable headrests and the all-important three-point seat belts takes less than a minute – and I didn’t need to refer to the handbook to work out how to do it.

As well as being easy to adapt, the seats are rock solid when in place – you will feel secure in the back row.

You can check out video proof of the ease of positioning the seats in the Grandis road test on our website www.companycardriver.co.uk.

The seats also have a hidden benefit – they flip over to create rear-facing picnic chairs when the rear hatch is open.

There is ample leg room for passengers, whether in the first or second row.

But despite the huge dash and front fascia, the space for the driver was on the cramped side for my six foot five inch frame, with my left knee rubbing on the edge of the dash.

I also found the gearbox a bit ‘ratchety’, particularly moving from second to first, which caused some mild pain in gridlock on the M25 on a Friday afternoon. 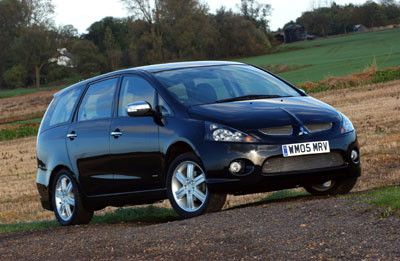 What the team thought

IN terms of looks, versatility, space, a strong diesel engine and general levels of equipment the Grandis Warrior is hard to fault. But it has to be balanced by questioning Mitsubishi’s equipment and pricing policy for this, the range-topping version.

An absence of traction control at this level is hard to justify – and plain bizarre considering its more lowly brethren do come suitably-equipped.

That gripe apart, in my hands our Grandis proved itself a noble beast of burden: whether uncomplainingly hauling its full quota of adults or the family and luggage or even as an impromptu builder’s van, with the Volkswagen-sourced turbo diesel engine under its truncated bonnet the Grandis never struggled. And with Mitsubishi’s record for value and reliability the Grandis makes a worthwhile case for itself as a safe ‘non-mainstream’ choice in its class.
Tony Toma

EXPERIENCE exceeded expectations at all levels. The engine is a real workhorse, providing great pulling power while maintaining a creditable economy figure.

The in-car DVD player proved a delight for my two young children and – due to the ensuing peace and quiet – for my wife and I, too. The only fly in the ointment is the lack of traction control – as my initial experience of burning rubber pulling out of junctions testifies.
John Maslen