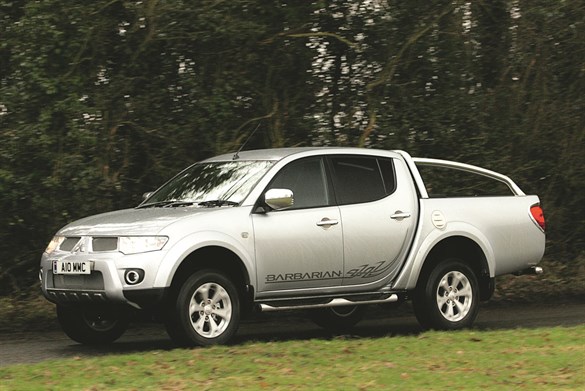 Tough vehicles probably don’t need to be made to sound tougher by giving them a hard-hitting or dangerous name.

Pick-up trucks are essentially working vehicles, despite their spell as being marketed seriously as dual-purpose lifestyle models.

But still there seems to be a need to add a mach-sounding name for top-end variants.

Mitsubishi has upped the bad-boy stakes further with its Barbarian version of the L200 (replacing the Animal – a tie-up with the clothing and boarding brand), although by now, these models are at risk of overdoing it and sounding a little camp.

The new ranger-topper, launched in February, arrives just as the L200 undergoes mild cosmetic changes inside and out, and is now offered with a more powerful diesel engine.

Fuel economy is improved by up to 6% through engine management revisions and modified gear ratios.

It comes with a 175bhp version of the 2.5-litre diesel found in other versions of the car, but shares the official 34.9mpg on the combined cycle of the 134bhp engine.

With a lumbering gearshift, it never feels that quick – 0-62mph in 12.1 seconds – although this isn’t a poor result in this class and it has lots of off-road hardware for tricky terrain.

Despite its modern exterior design, it falls behind vehicles like the Nissan Navara for the user-friendliness of its interior and functions.

The Barbarian will appeal to drivers allowed to have all the toys who like to stand out.

Despite the refresh, however, it’s less capable of hiding its age than other vehicles in this class.